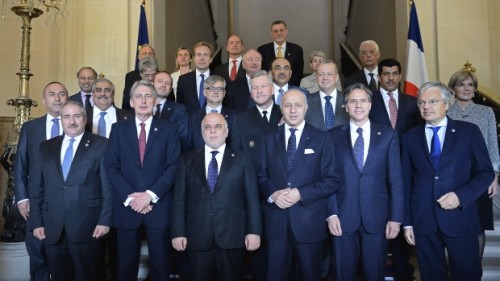 Op-Ed: Why I Support No-Fly Zones and Safe Havens
Is Iran Really Preparing to Send 50,000 Troops to Save Assad?

A high-profile meeting of 24 nations in Paris on Tuesday ended with little for an advance in the fight in Syria against the Islamic State, and nothing to suggest an approach towards the Assad regime.

The Foreign Ministers or their representatives gathered because of the threat from the Islamic State, which seized the historic city of Palmyra in central Syria two weeks ago. The militants have been under pressure throughout the country, with battles against Kurdish troops, rebels, or regime forces on various fronts; however, they are also pursuing their own offensives, including a campaign against the rebels in northern Aleppo Province — assisted by regime airstrikes and shelling — launched last weekend.

Almost all the media attention and most of the Ministerial statements focused on Iraq. Prime Minister Haidar al-Abadi claimed “a failure on the part of the world” and “very little on the ground”, as the militants captured the city of Ramadi in Anbar Province last month. The US promised more weapons to Iraqi forces, including anti-tank missiles, and there were pledges a recently-established stabilization fund to provide trained police personnel and emergency assistance. However, there was little on political strategy beyond an assertion of “the urgency to renew and expand our collective endeavor”.

Syria was barely mentioned in the post-session communique, despite the Islamic State’s conception of a fight “without borders” across the two countries. A briefing from a “senior US State Department official” foreshadowed the outcome: apart from a claim that “more than 22,000 fighters from a 100 countries all around the world have poured [into] Syria to join extremist organizations” and a reference to a US raid that killed an Islamic State official last month, there was nothing on the conflict.

Pressed by reporters, “Would you address the Syria portion of this?”, the official declared, “We have to get at this problem,” but did not cite a single measure, apart from a vague statement about stopping the movement of fighters across the Turkish border. Significantly, he did not mention the headline US program to train and equip 5,000 rebels, which was supposed to begin in March but is on the verge of collapse over logistics and a debate about the mission.

Video footage indicates that the Syrian air force is continuing to offer de facto support for the Islamic State’s offensive against rebels in northern Aleppo Province, bombing opposition-held areas near the frontline such as Tel Rifaat:

As the Islamic State launched its offensive against rebels on a 25-km (16-mile) front north and northeast of Aleppo city, Syrian warplanes began strikes. On Monday, scores of people were killed and wounded in attacks on Tel Rifaat and Mare’.

Syrian air attacks and shelling have reportedly killed more than 40 people on Wednesday, including at least 15 in a section of Aleppo city:

Aftermath of a regime barrel bomb attack on a Market in Jab al-Quba district in Aleppo. 15 civilians killed. #Syria pic.twitter.com/8F3NJRyxha

Another 20 people were injured in the market attack, four critically.

The President of the opposition Syrian National Coalition, Khaled Khoja, said on Wednesday, “The international community’s inaction towards the crimes of the Assad regime and the expansion of ISIS [Islamic State] does not serve the interests of the Syrian people or the peoples of the region as a whole and threatens further fueling the current conflict.”

The Islamic State’s attacks on regime forces in Hasakah city in eastern Syria, which began last weekend, are continuing. Reports on social media say the militants are again challenging Syrian troops in southeastern Hasakah, particularly near a major roundabout.

The Islamic State has taken checkpoints and briefly occupied areas on the perimeter of Hasakah, including villages and part of a national prison.

1/2) Battle of Hasakah city should be renamed the battle of Panorama Roundabout. Seriously

2/2) #Hasakah For the third time in a week, ISIS is now assaulting the roundabout after taking, and then losing, the nearby prison

In the midst of an interview with Bloomberg News, Russian Foreign Minister Sergei Lavrov puts out a falsehood which is either a big mistake or a well-placed item of disinformation.

Q: How far do you see Islamic State getting?

Lavrov: Very far, very far. They already make a lot of progress, in Iraq, in Syria, in Idlib [Province}…

There are no Islamic State forces in Idlib Province in northwest Syria. Instead, it is rebels who control more than 95%, after a series of victories over Syrian forces.

The clue to Lavrov’s false statement may lie in his follow-up casting all armed opposition to the Assad regime as “terrorist”: “[We must] make sure that we address these terrorists…irrespective of where they appear.”

The Islamic State attacked Lajat, in a volcanic area near Suweida Province, from the desert to the east. Local sources claim the assault was repelled, and a Free Syrian Army brigade issued a statement saying Lajat is still under full control of the rebels.

A spokesman for the Jaish al-Islam rebel faction claims scores of militants were killed:

#Jaishalislam and other factions foil ISIS offensive on Al-lajat area in N-E #Daraa. About 60 ISIS fighters were killed in the clashes

The Assad regime has tried to counter recent rebel victories in northwest Syria with a visit by the Army Chief of Staff, Ali Abdullah Ayoub, to Idlib and Hama Provinces.

Images in State media showed Ayoub greeting troops as he “affirmed the important role of the army soldiers in confronting the terrorist gangs and overthrowing plots aiming at weakening Syria and abandoning it from its resistant role against the hostile colonial projects”.

The reports made no reference to the rebel advances which have taken almost all of Idlib Province, including the provincial capital Idlib, and moved into Hama Province with the possibilities of offensives towards Hama city, Aleppo city, or Latakia on the Mediterranean coast.

Instead, media declare that Ayoub “appreciated the high combatant and moral spirit the army members are enjoying against psychological and propaganda war which attempts to affect the Syrian people and army who stand against terrorism sponsors”.