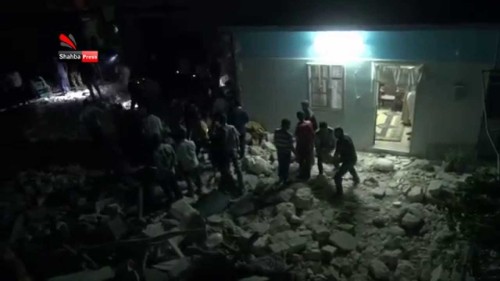 PHOTO: Aftermath of a regime bomb in Mare’ in Aleppo Province

The Syrian air force continued an escalation in bombing on Monday, assisting an Islamic State offensive on rebel-held areas in Aleppo Province in northern Syria.

The Local Coordination Committees reported confirmation of 83 deaths across the country, with 35 of them in Aleppo Province and 25 in Idlib Province.

Significantly, most of the Aleppo deaths were from regime strikes on Mare’ and Tel Rifaat, where rebels are trying to hold back the Islamic State offensive that surged over the weekend. Mare’ has been at the frontline for months, with the militants seeking to regain positions that they lost in early 2014 when battles erupted with rebel factions.

Video from Mare’ showed rescuers trying to save people, including a child, under the rubble of destroyed buildings.

The Syrian military is fighting the Islamic State in other areas of the country, having lost Palmyra in central Syria to the militants two weeks ago. In eastern Syria, the two sides are fighting in Deir Ez Zor and Hasakah Provinces.

As recently as Saturday, the Assad air force was bombing Islamic State-held areas in Aleppo Province, killing at least 51 people in al-Bab. However, as soon as the Islamic State challenged rebels along a 25-km front north and northeast of Aleppo city — pulling back from their threat to regime positions to the east — the Syrian aerial assault focused on rebel territory.

Activists are also claiming that Syrian forces in regime enclaves in Nubl and Zahraa, north of Aleppo city, are setting fires to hinder the move of rebel reinforcements.

State news agency SANA, in contrast to its reports of “stepped-up military operations leaving dozens of terrorists killed”, makes no reference to the military in Aleppo Province.

On Monday, the US Embassy in Syria, taking a much sterner line than officials in Washington, claimed a de facto regime-Islamic State alliance:

With these latest reports, #Asad is not only avoiding #ISIL lines, but, actively seeking to bolster their positon. #Syria

However, Pentagon spokesman Colonel Steven Warren said there would be no US aerial intervention against the Islamic State in Aleppo Province, in contrast to operations against the militants in eastern Syria. He indicated this was because the Syrian rebels are not reliable, telling a press conference, “[Our priority] remains Iraq, where we have a willing partner on the ground.”

The Islamic State’s attacks have taken some pressure off the Assad regime following a series of major defeats for the Syrian military since March. Assad forces have been all but ejected from neighboring Idlib Province, losing the cities of Idlib and Jisr al-Shughour, the town of Ariha, and military bases. The rebel offensive has moved into northern Hama Province, with the options of turning towards Latakia Province on the Mediterranean, Hama city, or Aleppo city.

The Syrian air force also continued strikes across Idlib Province, retaliating for the rebel gains. The LCC said 25 people died on Monday, most of them in Sinjar and Nahlaya, south of Idlib city.

A convoy of the Ahrar al-Sham rebel faction en route to Aleppo Province to bolster lines against the Islamic State:

A senior UN representative visiting the Damascus suburb of Moadamiya has reportedly told residents that the organization “can’t in any way bring any food or medicine” to the besieged town.

Moadamiya was cut off by the regime from mid-2012 in an attack to break the opposition. Under a ceasefire agreement in January 2014, food and supplies were meant to be allowed into the suburb, but the Syrian military has continued to limit deliveries with checkpoints and searches of civilians.

The UN officials were met on their arrival by large protests, according to Radio Free Syria. The residents also called for the release of detainees from the town.

The UN delegation was headed by the chief of the Syria bureau and the head of UN envoy Staffan de Mistura’s office. The opposition media said the regime will not allow any UN or other officials to visit besieged areas without a Syrian military escort.

The Islamic State attacked the town, in a rugged volcanic area, from the desert to the east. A Free Syrian Army unit has issued a statement saying Lajat is still under full control of the rebels.

Last month regime forces failed to take Lajat in an offensive near the borders of Suweida Province and mainly-Druze areas.

Reports: Israel Strikes Positions in East Lebanon, But Hezbollah Denies It Was Hit

Lebanese media are reporting that Israeli jets have struck a Hezbollah outpost near the town of Brital in eastern Lebanon, near the Syrian border.

However, Hezbollah has denied that any of its military positions were targeted.

A “security source” denied that a raid occurred, saying Israeli jets only hovered about targets. However, another source Another source said a strike had been carried out on hills between the Lebanese villages of Ham and Maaraboun.

Responding to appeals from local doctors, the Turkish Red Crescent has set up a field hospital in Idlib Province in northwest Syria.

Simsek called on international institutions to continue sending aid to Syrians and condemned regime attacks on hospitals: “Assad forces continue to kill regardless of age and sex….It is a war crime.”

More than 200,000 people have been killed in Syria since the conflict between Bashar al-Assad’s regime and opposition forces began in 2011, according to the UN.

In contrast to its de facto cooperation with the Syrian military in Aleppo Province, the Islamic State has launched another attack on regime forces in Hasakah city in eastern Syria.

Militants challenged Syrian army and militia positions in southeast Hasakah late Monday night, after they moved again into the nearby village of al-Dawoudiya. Islamic State fighters are also advancing near the ‘Abdel-‘Aziz mountains, southwest of Hasakah.

The Islamic State holds much of the territory in Hasakah Province, but the Syrian military has gone largely unchallenged in the city until last week. Then the militants fired shells and rockets into the center, while taking checkpoints and villages on the periphery. The assault was renewed on Sunday night, briefly holding part of a national prison.

Laham’s meeting this morning with President Hassan Rouhani is framed, “Iranian Government and People Will Stay by the Side of Syria“. Iran’s State news agency IRNA adds Rouhani’s comment, “After four years of resistance and struggle the enemies of Syria have come to realize that their dreams of gaining dominance over Damascus in just a few months were hollow ones.”

An interview with the Supreme Leader’s top aide, Ali Akbar Velayati, on Iranian TV is headlined, “Terrorists Will Fail to Achieve Their Goals in Syria”. SANA says Velayati praised “the strong resistance put up…by the Syrian government and people” and “lauded the Syrian leadership’s efforts in confronting terrorism and the American plots against the region”.

Velayati also met Syrian Speaker al-Laham on Monday, saying that regional crises are “a pervasive plot by the US, the Zionists and reactionaries”.

None of the stories refers to the key issues between Damascus and Tehran. The Assad regime is still pursuing a $4 billion line of credit, as $3.6 billion from July 2013 runs out, but Iran has held out against the request for months. There are also signs that the Islamic Republic has pulled back its military support, withdrawing forces from the north as rebels advanced and concentrating on areas around Damascus.