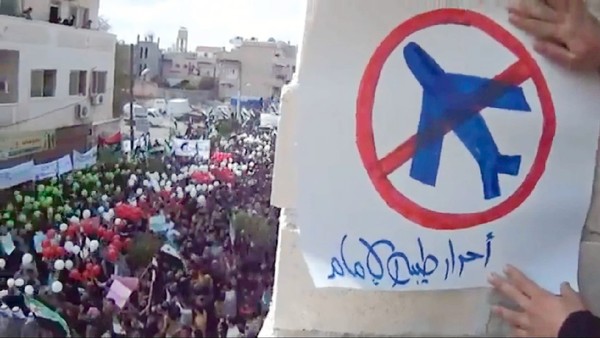 Following last week’s statement by the US Defense Secretary publicly distancing Washington from safe havens inside Syria, a “senior US official” has poured more criticism on the proposal.

In recent weeks, the Jordanian regime has publicly called for the establishment of the havens to protect Syrians inside the country near Jordan’s border. Diplomatic sources have confirmed to EA that Turkey, Saudi Arabia, the UAE, and Jordan are developing the plans. They say US officials, based in a joint operations center in Jordan’s capital Amman, are not involved; however, the Americans are aware of the planning and may be providing some intelligence support.

However, the official told VOA that the US was wary of any no-fly zone because it meant involvement with rebel factions and thus — because of battlefield cooperation — the Islamist group Jabhat al-Nusra: “Jabhat al-Nusra is a designated terrorist organization, we are prevented by U.S. law from working with the group.”

He also cited the supposed dangers of others in the Jaish al-Fatah rebel operations room, which was launched for the successful rebel offensive in northwest Syria and is now being implemented in other parts of Syria: “Other militias [Jaish al-Fatah] in the Army of Conquest like Ahrar-Sham may not be designated terrorist organizations and we may consider them more gray, but it is a gray which is pretty close to black.”

He said US officials are not in direct contact with Jaish al-Fatah’s leaders; however, information is moving via the externally-based opposition Syrian National Coalition: “We are in data-collection mode.”

Last week, Defense Secretary Ashton Carter stepped away from the idea of safe havens in a Congressional hearing, saying a no-fly zone would entail a “major combat mission” requiring US troops to fight the Islamic State as well as the Assad regime.

The chairman of the Joint Chiefs of State, General Martin Dempsey, said commanders had drawn up contingency plans for a safe zone in consultation with Turkish counterparts.

See Syria Analysis: US Publicly Backs Away from “Safe Havens” for Civilians