BBC Radio: How is Moscow Presenting the Conflict to the Russian People? 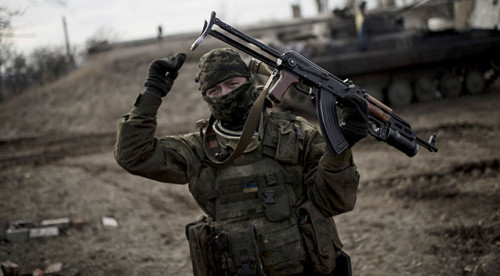 Reports on Tuesday indicated that rockets killed at least 10 civilians and soldiers in Government territory in east Ukraine, as separatists attacked an army-held rail junction. The latest fighting comes before today’s summit between Russia, Ukraine, France and Germany in Belarus.

Representatives of the “Contact Group” meeting in Belarus on the Ukraine crisis denied a report by Russia’s TASS news agency that a ceasefire deal had been reached in talks in Minsk. Rebel representative Denis Pushilin told Russian channel Rossiya24 it was too early to talk of any agreements and said the sides were taking a break.

European officials say it is difficult to imagine the rebels agreeing to halt and go back to earlier positions after weeks during which they have been advancing relentlessly.

As Russia provides military support with arms and fighters to separatists in eastern Ukraine, Natalia Rulyova of the University of Birmingham spoke with the BBC World Service’s Newshour on Friday about the presentation of the conflict to the Russian people:

Listen to interview from 32:27

There is a lot of coverage about what is going on in Ukraine, and it is all from one perspective.

Everyday Russian citizens who watch television see the story of Ukrainian civilians who live in Donetsk and surrounding areas who are being wounded and shot and taken to hospitals. They are always victims of shooting by the Ukrainian army.

And is Russia’s military intervention ever mentioned?

No, not at all, not Russian troops. However, they do talk about Russian civilians who help, for example, former soldiers as “volunteers” who help in this and that form.

Alternative voices, such as mothers of Russian soldiers “thrown into the conflict without even knowing they are in Ukraine”, are present — but only on the Internet and smaller “independent” media outlets.