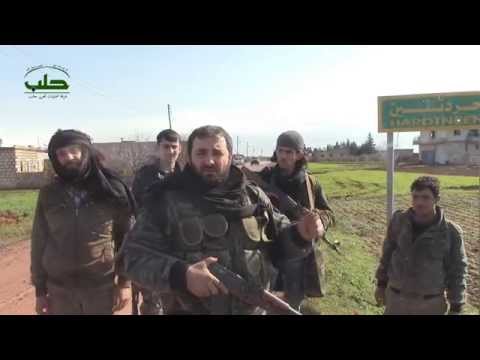 Rebel sources say they have finally cleared the last Assad forces from Hardantain, one of three villages briefly occupied by the regime during this week’s failed offensive in Aleppo Province.

The Assad fighters had holed up in a few buildings on the edge of the village since Thursday.

The pro-Assad site Al-Masdar News admits the defeat and worries that “Syrian Air Force Still Absent” because of poor weather.

[UPDATE 1030 GMT: The Syrian Air Force has resumed operations this morning, with reported strikes on Rityan, one of the three villages captured and lost during the week.]

The rebels have reclaimed Bashqwy, Hardantain, and Rityan, foiling the regime attempt — including Hezbollah, Iranian, and Afghan fighters — to ease pressure on its besieged enclaves of Nubl and Zahraa.

Fighting in Hardantain just before the final regime withdrawal:

Rebels moving with armored vehicle into the village:

Assad forces also suffered heavy losses when they failed to take territory near Handarat, on the main route to opposition-held areas of Aleppo. Rebels subsequently took the key position of al-Mallah Farms, further pushing back the regime effort to cut off the opposition in Syria’s largest city.

Hundreds of an estimated 2,500 regime fighters in the offensive have been killed, wounded, or captured, though the exact scale of the defeat is still unclear.

Al-Masdar News posts the names of 78 claimed rebel dead. Earlier this week, pro-opposition activists said 52 rebels had been killed across the Aleppo battlefronts.