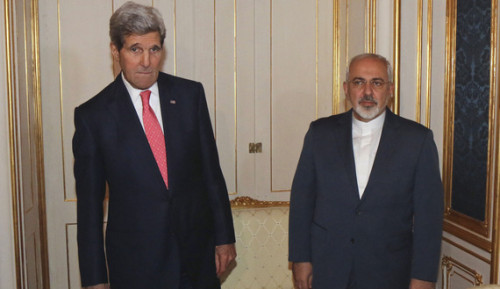 Iran’s Foreign Minister Mohammad Javad Zarif and US Secretary of State John Kerry will meet on Sunday in Geneva, again seeking advance towards a comprehensive nuclear agreement by a July 1 deadline.

Lead Iranian negotiator Araqchi said Friday’s discussions were “positive and serious” but said this did not mean “extraordinary progress”. Indicating that agreement is not imminent, he urged the US and its allies to take up detailed points:

We seek innovation and development in the way the negotiations are being held in a bid to speed up work….

After one year of negotiations on all aspects and topics, we have come to a point where we should enter into details.

Last month, Kerry and Zarif met for seven hours in Geneva amid week-long intensive talks between Iran, the US, and the other 5+1 Powers (Britain, France, Germany, China, and Russia). However, the two men could not close differences on key issues such as the number and level of Iran’s nuclear centrifuges for uranium enrichment, the lifting of US-led sanctions, and the duration of an agreement.

US officials subsequently put out the possibility of a two-stage resolution, with an agreement on General Principles in March and a comprehensive deal by July 1. However, Iran’s Supreme Leader has firmly rejected the option, insisting on a full and final one-stage settlement.

Zarif repeated the line on Friday and continued:

I think that there are important issues in our discussions — if we agree on them, reaching a full agreement is not a problem.

If the other side wants to be greedy, we have no problem showing the world that the Islamic Republic wants a good and reasonable agreement.

Delivering the Tehran Friday Prayer, Ayatollah Mohammad Ali Movahedi Kermani warned worshippers that former President Hashemi Rafsanjani must not be elected as head of the influential Assembly of Experts next month.

Rafsanjani, who led the Assembly from 2007 to 2011 but was then defeated in a re-election bid, is fervently disliked by hardline politicians and clerics. Rumors have circulated for months about a possible opponent, including Ayatollah Movahedi Kermani, but no choice has been made. Meanwhile, the denunciation of the former President has continued, with criticism of his son Mehdi Hashemi — on trial for fraud — and claims of Rafsanjani’s involvement in “sedition”.

Movahedi Kermani said on Friday that the members of the Assembly of Experts must be “saturated with obedience to the Supreme Leader” and that a wrong choice in the election could be catastrophic.

Its head, Ayatollah Mahdavi Kani, passed away in October after a heart attack and a lengthy coma.