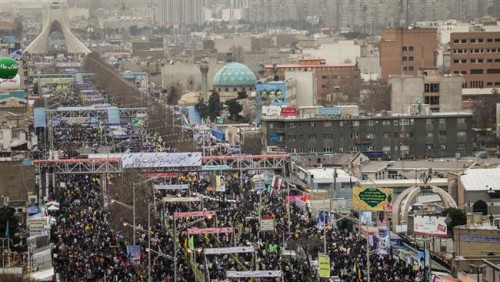 PHOTO: Marchers on Way to Azadi Square in Tehran (Mehr)

UPDATE 1200 GMT: President Rouhani repeated his lines on the nuclear talks in his address to Iranians marking the anniversary of the 1979 Islamic Revolution.

We seek a win-win agreement, according to which Iran would [guarantee] the transparency of its peaceful nuclear activities within the framework of international law and the opposite side should put an end to inhumane and illegal sanctions. This will benefit both sides.

Foreign Minister Mohammad Javad Zarif said as he marched, “Reaching an agreement requires the political will of the other side and if such a resolve is shown, we can reach an agreement now, but if the other side does not show to have this resolve, we will not obtain results even if the negotiations continue for 10 years.”

UPDATE 0800 GMT: Speaking with reporters during the march for the anniversary of the Islamic Revolution, President Rouhani again referred to economic and political difficulties: “Iranians are determined to prevail over all problems.”

Amid economic problems and at a critical point in nuclear talks, Iran’s regime is hoping for a mass show of support on Wednesday’s anniversary of the 1979 Islamic Revolution.

President Rouhani and Speaker of Parliament Ali Larijani are among those who have appealed to Iranians to march. Rouhani said on Monday, “Undoubtedly, we can go through economic problems and the nuclear negotiations more easily with the high massive turnout of the Iranian nation in the February 11 rallies.”

God willing, on #Bahman22, Iranian nation will show that whoever wants to humiliate them will be faced with an equal blow.

State media are already proclaiming that “millions” of people have responded today across Iran: “By attending the rallies on Wednesday, the Iranians reaffirm their allegiance to the causes of the Islamic Revolution and Ayatollah Ruhollah Khomeini, the late founder of the Islamic Republic.”

Meanwhile, Foreign Minister Mohammad Javad Zarif restated on Tuesday, “Iran has entered into the nuclear negotiations with goodwill and strong determination and insists on its principled positions. And if the other side, too, has the goodwill and the necessary and sufficient determination, we can reach results.”

Rouhani echoed, in an address to foreign diplomats and ambassadors:

[We have] always believed in a win-win accord for the nuclear issue, and is still emphasizing such an agreement. The Islamic Republic of Iran has exhibited the necessary flexibility in resolving the [nuclear] issue politically, and we hope that our negotiating sides would also show the required political will more than before to settle this issue.

The Supreme Leader, behind a defiant rhetoric, appealed last weekend to the US and other 5+1 Powers (Britain, France, Germany, China, and Russia) to accept a compromise nuclear deal. He said that Iran must have a one-stage final resolution, and would not agree to a US proposal for a statement of General Principles in March followed by a full settlement by a July 1 deadline.

The Supreme Leader, Rouhani, and Zarif have all said that Iran must have sanctions relief, including the lifting of crippling restrictions on oil and banking sectors, within six months. The US is reportedly saying that the process will take “years”.

Iran and the 5+1 also have had no public advance towards agreement on Tehran’s centrifuges for uranium enrichment, despite intense talks over the past month with face-to-face meetings between Zarif and counterparts like US Secretary of State John Kerry.

In perhaps the most significant statement — given his reputation as a “moderate” favoring engagement with the West — Rouhani’s mentor and former President Hashemi Rafsanjani said on Tuesday, “Iran is to protect its legitimate rights and if they [the 5+1} ignore them, Iran will leave the talks. We do not want anything more than our rights.”