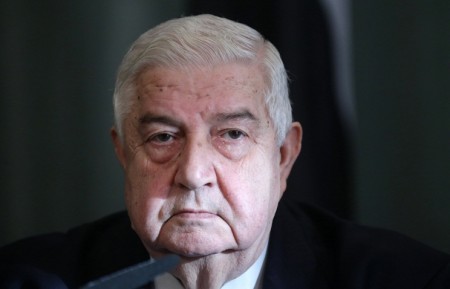 PHOTO: Syrian Foreign Minister Walid al-Moallem: We “will not refuse to meet” with domestic opposition

Video: The Stabbing of an Old Man By Pro-Assad Militia

The Assad regime has put aside its hesitancy and agreed to meet representatives of the domestic opposition in Russia, if the talks go ahead on January 28.

President Assad was cautious about the conference, proposed in November by Moscow, “It is too early to judge the potential for the success of failure of this step….If [the other side] have something useful and is in the best interest of the Syrian people and the country, we will go forward, and if not, we will not deal with them seriously.”

“Nevertheless,” Assad said, “We support this Russian initiative, and we believe that we should go as a government in order to listen to what they have to say.”

Foreign Minister Walid al-Moallem went farther on Wednesday, albeit with the convoluted statement that the regime delegation would “not refuse to hold meetings with someone from opposition members”.

Despite the regime’s acceptance, Russia’s high-profile initiative, seeking some legitimacy for Assad’s continued grip on power, appears to be in trouble. The largest domestic opposition groups, including the National Coordinating Body, have pulled out of the discussion. Leading political figures like Moaz al-Khatib, the former head of the externally-based Syrian National Coalition, have also said they see no future in the process.

Moallem tacitly acknowledged the difficulty, echoing Russian threats, “Those opposition figures who will come to Moscow will take part in the future dialogue and those who will boycott the meeting will have no further role.”

The Foreign Minister also warned, “External forces will try to disrupt the meeting. Therefore there are political attitudes that the goal of the conference is to necessarily topple the regime.”

Nevertheless, Moallem pointed to the regime’s strategy to present itself as the side willing to reach a settlement of the 47-month crisis, while the opposition — even inside Syria — is blocking advance:

We have directions from President Bashar al-Assad to put every possible effort to make Moscow meeting a success….[We will] come to agree on holding a Syrian-Syrian dialogue to draw out a vision for Syria’s future.

Russia did issue invitations to five members of the externally-based Syrian Opposition Coalition, including former President Hadi al-Bahra. However, it denied the Coalition’s legitimacy by addressing the five as individuals, rather than as leaders of the body.

Activists claim 10 to 15 Islamic State fighters in Raqqa have defected, freeing detainees from a jihadist prison.

A member of Raqqa is Being Slaughtered Silently said the defectors, mostly Saudi Arabian nationals, left after two of their fellow Saudi fighters were accused of treason and executed earlier this week.

The fighters released six members of Jabhat a-Nusra, whom they likely knew before joining their respective factions, and local civilians.

Islamic State reportedly responded with a curfew on Raqqa on Wednesday night and checkpoints in and around the city.

The insurgent Islamic Front says it shelled the headquarters of regime militia in the Mezzeh section on Damascus on Thursday.

The Front said the attack was in retaliation for the regime’s shelling and airstrikes on opposition-held areas of East Ghouta near the capital.

Footage of Kurdish fighters battling the Islamic State in Kobane in northern Syria:

The Kurdish center has been under attack by the jihadists, who at one point controlled 40% of the city, since September.

This week Kurdish officials announced further success in their pushback of the Islamic State, saying they had reclaimed Mistenur Hill overlooking Kobane.

The Free Syrian Army has also been involved in the defense of the town. Video of the Raqqa Revolutionary Brigade storming an Islamic State headquarters in a hospital:

Jaish al-Islam, one of the largest insurgent factions, has rejected a “truce” with the Assad regime in the Damascus suburb of Irbeen.

The group said any attempt by the Syrian military to enter the town will be met with force.

The Assad regime has been proclaiming the possibilities of “reconciliation” in Irbeen and other Damascus suburbs. Some residents have left in recent weeks amid the long-time siege, leading Damascus to proclaim success in its moves toward pacification of the area.

Funerals were held Wednesday for two of the Hezbollah personnel killed Sunday in an Israeli airstrike in southwest Syria.

Mohammed Ali Abou al-Hassan was laid to rest in Ain Qana, while Abbas Hijazi was buried in the southern town of Ghaziyeh alongside his father, who passed away hours later after a lengthy coma: 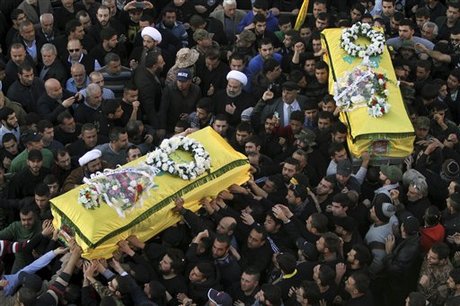 Reports indicate the force was setting up a Hezbollah missile base near the Israeli-occupied Golan Heights.

Abou al-Hassan, 30, was a graphic designer who worked for several companies in Lebanon. Close friends did not know that he was a member of a Hezbollah special forces unit.