Syria Video Feature: The Stabbing of an Old Man By Pro-Assad Militia 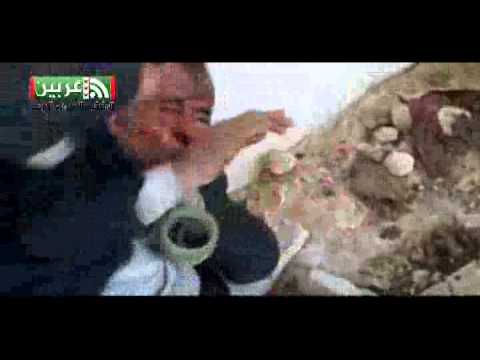 It is only one of the more than 200,000 deaths in the Syria’s conflict, but it is a graphic example of the depth of violence.

Near Harasta, northeast of Damascus, three pro-Assad militiamen (shabiha) confront an old man and ask him if he knows of any insurgents. They persist in demanding names and locations despite the man’s protests that he knows nothing.

Frustrated and angered, the shabiha stab the old man in the head and finally shoot him.

The footage was apparently from the mobile of one of the militiamen when it was lost during a clash with insurgents.

EA sources have confirmed the authenticity and context of the video.

The opposition and regime have fought for control of Harasta since 2012. Much of the area is controlled by the opposition, but is under sustained pressure from Syrian forces and militia.