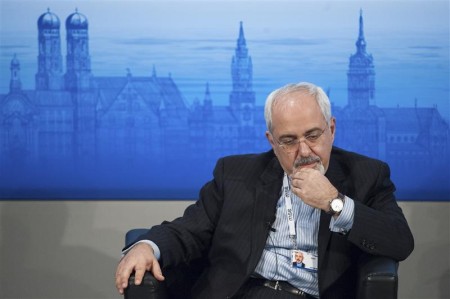 LATEST: Regime Stokes Threats Against Israel — “The Zionists Should Go and Prepare Their Shelters”

Amid a lack of progress in nuclear talks with the US and other powers, Iran’s hardliners have launched an attack on Foreign Minister Mohammad Javad Zarif (pictured).

A week of bilateral discussions, including with US Secretary of State John Kerry, culminating in Sunday’s plenary session with the 5+1 Powers (US, Britain, France, Germany, China, and Russia) failed to close the gap over key issues such as Iran’s number and level of centrifuges for uranium enrichment. Zarif and Iran’s lead negotiator, Deputy Foreign Minister Abbas Araqchi, spoke of “difficult” and “tense” negotiations.

Hardliners have been cautious about their challenge to Zarif because the Supreme Leader has endorsed the continuing talks. However, given the prospect of breakdown, they went on the attack.

On Wednesday, the head of the Basij militia, Mohammad Reza Naqdi, listed a series of Zarif “mistakes” before proclaiming, “I thought Zarif was a professional diplomat but now I believe he is not.”

Naqdi chided Zarif for warning that the US could break Iran’s defenses with a single missile and for last week’s walk in Geneva with US Secretary of State John Kerry, during their seven hours of talks.

However, the “worst and unforgivable” mistake was away from the nuclear front, according to Naqdi. It was Zarif’s journey to France on the day when the insulting cartoon of the Prophet Mohammad was published” by Charlie Hebdo magazine.

Naqdi concluded, “These mistakes show that Zarif is not Iran’s representative and cannot defend the rights of Iranians.”

The next wave of the attack could come in Parliament: hardliners of the Endurance Front said the Foreign Minister has been summoned to the Majlis next week to answer questions.

Regime Stokes Threats Against Israel: “The Zionists Should Go and Prepare Their Shelters”

Using meetings with the Secretary-General of the Popular Front for the Liberation of Palestine, Iran’s leaders — including “moderates” — have put out threats against Israel after the Israeli airstrike killing Hezbollah and Iranian commanders inside Syria on Sunday.

Foreign Minister Mohammad Javad Zarif said after the meeting with Ahmad Jibril, “The aggressive act of the Zionist regime in Golan [the Israeli-occupied area on the Syrian border] is another sign of cooperation between this regime and the Takfiri terrorists.”

“As the Lebanese Hezbollah Secretary General has said, the Zionists should go and prepare their shelters.

The Zionist army has been defeated by Hezbollah once in Lebanon and by Palestinians twice in Gaza; the resistance of the Palestinian people and fear of the Israelis will speed up the defeat of the Zionists.

Defense Minister Hossein Dehghan told reporters, in an echo of the Revolutionary Guards’ promise of “destructive thunderbolts” issued earlier this week, “The Zionists will receive a crushing response in due time and place.”

Reformists and Ayatollahs Stake Out Positions Against Hardliners

The clerics — including Ayatollah Javadi Amoli, Ayatollah Amini, and Ayatollah Gerami — pointedly said that in the next election, “people should not vote for the lawbreakers”.

Referring to a physical attack on MP Ali Motahari on the floor of Parliament over his call for the release of detained opposition leaders, Ayatollah Amini said “future MPs should be law-abiding and not commit acts such as the ones we have recently witnessed”.

Ayatollah Javadi Amoli was direct, “We should stop hardliners as the country belongs to all political parties, not only one.”

And Ayatollah Gerami said the next Parliament should compensate people for the damages caused by the Ahmadinejad Government from 2005 to 2013 while praising former reformist President Mohammad Khatami: “Unfortunately the system is not using [his] full potential.”