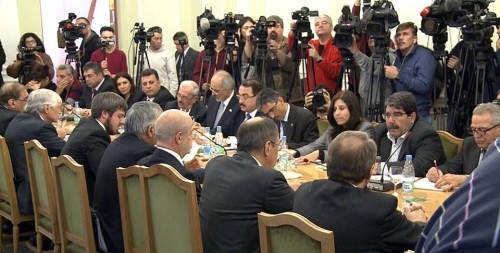 The clearest indication of the failure of this week’s Russian “peace” talks between a regime delegation and members of Syria’s domestic opposition has come from an unlikely source — Syrian State media.

The headline on State news agency SANA’s report of the two-day discussions, which finished Thursday, is upbeat: “Moscow Meeting Broke the Deadlock”. The text tells a far different story, via the head of the Assad delegation, Syrian Ambassador to the UN Bashar al-Jaafari.

Jaafari threw a diplomatic bone to the Russians, whose high-profile, two-month pursuit of the talks effectively collapsed when Syria’s leading opposition groups refused to attend and President Assad backed away from the process — he says, “The Russian friends have succeeded where the others have failed” by getting some people around the table.

However, the Ambassador followed this by damning the talks. While the regime delegation was “positive and open all through the consultative sessions”, the 34 “individuals” on the other side were not. The attempt to display agreed “Moscow Principles” (see below) for further discussions failed when “some opposition figures, in their personal capacity,…opposed the idea of endorsing Moscow principles in the last minute, coming up with unconvincing justifications that surprised the Russian side”. Both sides had agreed on “acknowledging the existence of foreign-backed terrorism”, but “some oppositions have rejected points related to fighting terrorism”.

Jaafari concluded, “Not for once did we listen to a unified position by the opposition, not even on the humanitarian issue.”

The Moscow Principles sought by the regime pushed aside the condition that President Assad step down from power for a transitional government Instead, they implied, in line with President Assad’s interviews in the last two weeks, that any issue over the government’s status will be put to a referendum.

The Ambassador said no date had been agreed to follow up the “preparatory and consultative” talks but he “hoped the final meetings will come in the context of a national dialogue conference held in Damascus”.

Over the past four years, Syria witnessed the spread of unprecedented wave of terrorism that victimized tens of thousands of people in Syria and caused suffering to millions. Terrorists and extremists from all over the world were sent to Syria to promote takfiri thinking and impose new style of life which is very strange to the Syrian society.

The Syrian economic and social infrastructure, built over the past decades by the Syrians’ efforts, in addition to the country’s cultural heritage have been the target of the terrorists’ acts of looting, stealing and destruction.

On this basis, all national peaceful parties in the Syrian society and all national people should adopt decisive procedures to make a change in the situation as soon as possible.

In this context, it is necessary to set political principles for Inter-Syrian-national dialogue without preconditions that help the Syrians settle urgent national issues.

1. Preserving the sovereignty, unity, independence and territorial integrity of the Syrian Arab Republic.

2. Fighting all forms of terrorism and coordinating efforts to combat terrorists and extremists in the Syrian land.

3. Settling the crisis peacefully on the basis of Geneva Statement issued on June 30, 2012.

4. Deciding Syria’s future based on free expression and democracy.

6. Maintaining the army and armed forces as a symbol of national unity and preserving the state’s institutions.

7. Preserving the sovereignty of law, respecting the participle of citizenship, and enhancing the principle that all citizens are equal before the law.

8. Rejecting any form of foreign armed forces existence in Syria without the approval of the Syrian government.