Syria Daily, Dec 16: The Insurgency’s Big Victory in the Northwest 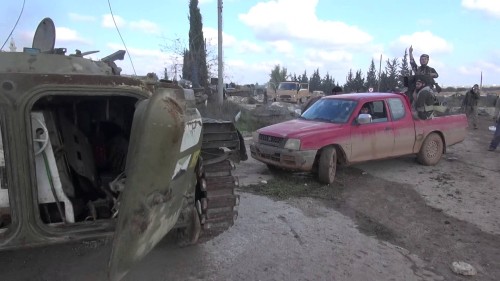 UPDATE 1730 GMT: The Syrian military has continued bombing in retaliation for the loss of its bases in Idlib Province, hitting the nearby town of Maarat al-Num’an:

Pro-opposition journalists claim more than 250 Syrian troops were captured as they tried to flee the Wadi ad-Deif and Hamidiyah bases, south towards Morek in Hama Province.

After months of planning and coordination, insurgents have seized two key regime bases in Idlib Province in northwest Syria.

Insurgents consolidated their hold Monday on both the Hamidiya and Wadi ad-Deif bases, near the opposition-held town of Maarat al-Num’an.

Both bases are important not only to maintain a regime position in Idlib but also in the support of the Syrian military in Aleppo and Hama Provinces. The loss of the complexes, used for aerial operations and to supply forces across northern and central Syria, could hamper the Syrian military — even as it is trying to cut off the routes supporting insurgents in Aleppo city — and threaten a counter-attack on the areas between Idlib and Hama city.

The important victories were missed or misunderstood by mainstream media. Al Jazeera English has nothing on the developments. Fed by the “monitoring group” Syrian Observatory for Human Rights, other outlets — including Reuters and Lebanon’s Daily Star — reduce the success to an operation carried out almost alone by the Islamist faction Jabhat al-Nusra, “Syria’s Al Qaeda Takes Base Next to Major Highway”. And the Washington Post ignores the victories in favor of a claim that Jabhat al-Nusra used a US-made TOW anti-tank guided missile.

In fact, the long-planned operation, culminating more than two years of pressure on the bases, was carried out by Free Syrian Army units and leading groups in the Islamic Front as well as Jabhat al-Nusra. The success also comes three weeks after more than 70 insurgent factions launched the Revolutionary Command Council to organize the fight in the north against the Assad regime.

Video from inside the Wadi ad-Deif base:

Insurgents celebrating on Monday inside Hamidiya, even as the regime punished nearby villages, killing at least 13 civilians, in retaliation:

Unsurprisingly, the insurgency is not indicating their next steps, which could include a move into Aleppo Province to counter the regime threat to cut off the opposition in Aleppo city or a strike south towards the key town of Morek, lost in October to Syrian forces.

Insurgents on the road south to Hama Province, amid destroyed regime armored vehicles:

Halqi presented a message from President Assad hailing bilateral relations and “joint will to confront the plots concocted by the US, Israel, the West, and their pawns in the region which provide material, moral, and military support to terrorist organizations”.

According to Syrian State news agency SANA, Rouhani “stressed that the global conspiracies against Iran will not dissuade it from continuing its support for Syria’s government and people”.

Substantive business was carried out in Halqi’s meeting with Iranian 1st Vice President Eshagh Jahangiri. The Syrian Prime Minister appeared to be seeking an extension of Iran’s $3.6 billion line of credit, arranged in July 2013, saying that it had provided food and oil derivatives through 2015 as well as spare parts for power plants, hospitals, and factories.

Video: Burning Shops and Buildings From Regime Bombardment of Al Wa’er in Homs

Shops and buildings burn after the latest regime bombardment of the al-Wa’er section of Homs:

The regime has tried for months to push out insurgents from the area, home to hundreds of thousands of displaced Syrians, after the opposition evacuated other sections of Homs in the spring.

Activists say at least five people have been killed today by the attacks.

Syrian Prime Minister Wael al-Halqi arrived in Tehran on Monday night for discussions with Iranian officials which are expected to last several days.

the statement on official Syrian media indicates al-Halqi will be considering Syria’s economic difficulties and how Iranian support can continue to assuage them:

The Premier said that the visit comes within the framework of the growing and booming Syrian-Iranian cooperation in economic, trade, industrial, health, and development sectors.

He noted that new cooperation prospects will be discussed in order to enhance the steadfastness of the Syrian people in the face of the economic war and the unjust blockade imposed on the country.

Al-Halqi added that this can be achieved through the Iranian credit line and the implementation of joint development projects as well as the participation of Iranian companies in the reconstruction stage in Syria.

The Prime Minister is accompanied by Syria’s Ministers of Oil, Industry, Health, and Electricity. He was greeted at the airport by Iran’s Roads and Urban Development Minister, Abbas Akhoundi.

Halqi is heading a delegation which includes the Oil, Industry, Health, and Electricity Ministers.

Iran propped up the Assad regime with a $3.6 billion line of credit, including supply of oil and gas, in July 2013. However, the Syrian economy has shown signs of buckling as winter approaches. The Government has reduced subsidies on fuel amid the near-collapse of domestic energy production, and it recently devalued the Syrian pound.