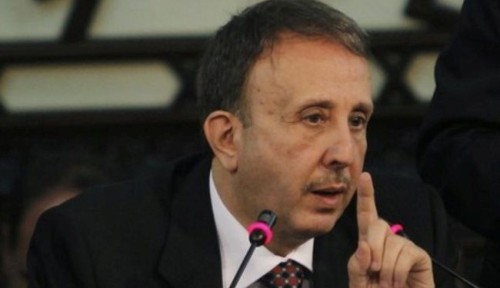 The Assad regime continued a high-profile “anti-terrorism” PR campaign on Tuesday, with the Speaker of the People’s Assembly, Mohammad Jihad al-Laham (pictured), using the platform of an international conference in Pakistan.

Speaking at the Asian Parliamentary Assembly in Lahore, al-Laham called for “mobilizing efforts to fight terrorism according to a comprehensive strategy and with the participation of all countries”: “Any support to the armed terrorist organizations in Syria is a flagrant violation of the UN charter and Security Council’s resolutions.”

The regime has tried to isolate the insurgency — cutting off political, economic, and military support — as well as deflecting attention from the effect of sieges and bombing on civilians and limiting any news of insurgent advances. Earlier this week, Damascus hosted a two-day international conference, claiming the participation of 25 countries, on “combating terrorism”.

Al-Laham’s address pointed to a new regime objective. Denouncing a “US-led coalition” for supposedly ignored UN Security Council resolutions, he warned against any creation of safe havens and no-fly zones in northern Syria.

Turkey has been in discussions with the Americans about the initiative. So far President Obama has held out against the creation of the havens.