Iran Daily, Dec 3: Is Tehran Carrying Out Airstrikes Inside Iraq? 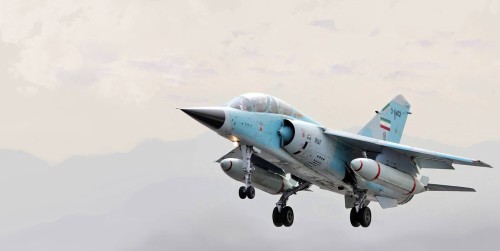 LATEST: At Least 3 Die in Suicide Bombing of Iranian Ambassador’s Residence in Yemen

The US military has supported reports that Iran has carried out airstrikes inside Iraq.

Kirby emphasized that the US was not co-ordinating with Iran over the aerial campaign.

The deputy head of Iran’s armed forces, General Massoud Jazayeri, was also intent on denying any co-operation. He launched an attack on Washington, “The Islamic Republic of Iran blames the United States as the root cause of unrest and problems as well as the terrorist actions of the Islamic Staet in Iraq.”

Jazayeri claimed that cities, villages, and infrastructure in Iraq and Syria have been destroyed and “people massacred” by the Islamic State because of the support of the US and “a number of regional states”.

He concluded, “The United States will definitely have no room or place in the future of that country.”

Iranian ground forces — including leading commanders such as the head of the elite Qods Force, General Qaseem Soleimani — have been involved in Iraq since the Islamic State’s offensive advanced on Baghdad in June. They initially held a defense line north of the Iraqi capital and later have been in campaigns to recapture towns such as Amerli in northern Iraq and Jurf al-Sakher to the west of Baghdad.

Further tough talk about the US came from the Revolutionary Guards’ naval commander, Rear Admiral Ali Fadavi: “The Americans do not dare to give a dirty look to Iran,”

At least three people were killed Wednesday when a suicide bomber drove a car at the residence of the Iranian Ambassador in the Yemeni capital Sanaa.

Yemeni and Iranian guards were killed and a paramedic said three dead bodies and three wounded were taken from the area.

It is unknown whether the ambassador was in the residence at the time of the blast.

Ali Ghazali, a journalist and editor at Baztab Emrooz and Ayandeh Online, has been arrested for the second time over his articles on major fraud cases and political corruption.

Ghazali was detained on Sunday after the CEO of Sepah Bank, Kamel Taghavinejad, filed a complaint.

The journalist was arrested in spring 2013 after he reported in Baztab about recorded evidence of former President Ahmadinejad discussing vote-rigging during the disputed 2009 Presidential election.

In recent months, Ghazali has claimed secret deals between Taghavinejad and Hamid Pourmohammadi Gol-Sefidi, the deputy president of the Iranian Central Bank during Ahmadinejad’s Presidency.

Gol-Sefidi was imprisoned over a $2.6 billion fraud case, exposed in autumn 2011, in which forged documents were used for credit lines to buy state-owned companies.

In May 2014, Amir Mansour Arya, a billionaire and Ahmadinejad supporter, was hanged for his involvement in the fraud.

Foreign Ministry: No Agreement on Time and Place for Next Round of Nuclear Talks

Iran’s Foreign Ministry has said that arrangements for the next round of nuclear talks between Iran and the 5+1 Powers have not been established.

“The time and location of the future negotiations between Iran and the Group 5+1 has not been determined yet,” spokeswoman Marzieh Afkham told reporters on Wednesday.

Iran and the 5+1 adjourned last week without agreement in Vienna, extending the talks and interim arrangements to July 1.

Rouhani: Iran Will Preserve Its Nuclear Rights in A Deal

President Rouhani has assured an audience of war veterans in northern Iran that the Islamic Republic “will not give up even an iota of its inalienable rights” in a nuclear deal with the 5+1 Powers.

Talks between Iran and the 5+1 (US, Britain, France, Russia, Germany, and China) ended last week without a comprehensive deal. The negotiations and interim arrangements were extended to July 1.

“Today like before we will continue our resistance on the path of the country’s national interests and goals as well as our religion,” Rouhani said.

He declared as he formally opened a railway:

You should not have any doubt that the Group 5+1, the western world, the eastern world, and the region all are in need of constructive interaction with Iran….

The world today has accepted the nuclear enrichment to take place on Iranian territory.

Rouhani underlined that the world has accepted that the time for imposing oppressive sanctions against Iran is over.

He pointed to the removal of “oppressive sanctions” as an inalienable right of the Iranian nation, and said, “You should have no doubt that Iran will become triumphant and Iran will be better off next year.”

Foreign Minister Mohammad Javad Zarif echoed at a conference in Tehran, “We want nothing more than our rights because Iran’s nuclear diplomacy is and will be based on the Supreme Leader’s religious decree and also on the 100% peaceful strategic calculations.”