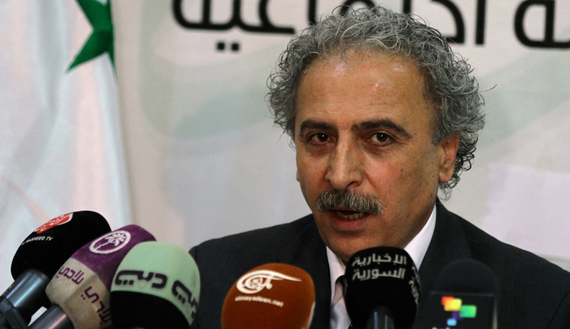 The Assad regime has arrested a leading opposition figure in Syria, after he spoke with foreign media about tensions among the Alawite community — to which President Assad belongs — inside the country.

Louay Hussein was detained on Wednesday on the Lebanese-Syrian border as he travelled to Beirut, from where he was flying to Spain to visit family living there since early 2012.

This arrest comes within the framework of the Syrian regime’s ongoing acts of suppression and clamping down on political freedoms and opposition politicians. We are surprised by this arbitrary arrest, which Syrians have become accustomed to.

Hussein was referred to the first investigating judge facing ready-made charges fabricated by the Syrian regime, as is the case with any pro-opposition political activist. He has been accused of “weakening national sentiment and the morale of the nation”.

Hussein’s specific “crime” may have been talking to Hugh Naylor, a reporter from The Washington Post, for an article on unease among Alawites — seen as the bedrock of support for the regime — about their growing unease.

Hussein said, “The Alawites are growing more and more impatient with the regime because it hasn’t been able to demonstrate much progress in ending the war.”

Or he may have been detained after his BSS party sudden withdrew from an initiative, which it has launched for political parties in Syria to issue a statement to stop the advances of the Islamic State. Instead, the BSS declared on November 2, “Louay Hussein calls on Syrians to save their country: The regime is collapsing, which will not benefit anyone”:

The Syrian regime is aging and breaking down….The presence of the president in his palace, with thousands of soldiers protecting him, does not change this reality….All Syrians — whether pro- or anti-regime — [should] speak up and take action to save the state, through a political settlement that would replace the regime with a coalition government, including pro-opposition and pro-regime members as well public figures who would have the capacity to protect the country.

Hussein was also arrested on March 22, 2011, just after the start of the Syrian uprising, after he expressed solidarity with the people of Daraa in southern Syria in their demonstrations.

He was released in June 2011. Three months later, he founded the BSS movement with the participation of a broad spectrum of intellectuals and activists.

The BSS deputy leader Joudeh said that the movement is likely to continue working from Syria without being licensed by the regime, which does not recognize it as a legitimate political group.

The Obama Administration has pushed back media claims that “Al Qa’eda” — i.e., the Islamist faction Jabhat al-Nusra — and the Islamic State have reconciled in Syria.

Fed by sources in Turkey and Jordan, outlets like the Daily Beast and the Associated Press have spread headlines of a reunion betweeen the two groups, who split in spring 2013.

“We don’t see that,” Director of National Intelligence James Clapper said on Friday. “There have been tactical accommodations, on the battlefield, on occasion, where local groups have united in the interest of the tactical objective, but broadly, I don’t see those two uniting, at least yet.”

US and Turkish military officials have met in Ankara for a third time to discuss the equipping and training of 2,000 members of the Free Syrian Army.

Officials from both the US European Command and the US Central Command and high-ranking Turkish military officials reportedly agreed on a number of points about the training in Turkey, part of an American plan to build a 5,000-member armed force in the next year.

The training is set to begin at the end of December.

Video: Insurgents Launch Attack on Regime Base Near Main Highway in South

Insurgents have launched an offensive on the Brigade 82 base, near Sheikh Maskin on the main highway from Damascus to the Jordanian border:

Opposition fighters, including Free Syrian Army units, captured Sheikh Maskin last week. They also took control of Nawa, just to the west, as they consolidated their hold on territory in Daraa Province and threatened to cut off Damascus from southern Syria.

The insurgents also claimed on Friday that they had taken a regime communications center near Sheikh Maskin.

Norwegian filmmakers said on Friday that they faked a viral video which purportedly showed a Syrian boy rescuing a little girl under gunfire.

Director Lars Klevberg said it was filmed in Malta this summer to generate a discussion about children in conflict zones:

We shot it in Malta in May this year on a set that was used for other famous movies like Troy and Gladiator. The little boy and girl are professional actors from Malta. The voices in the background are Syrian refugees living in Malta.

By publishing a clip that could appear to be authentic we hoped to take advantage of a tool that’s often used in war; make a video that claims to be real. We wanted to see if the film would get attention and spur debate, first and foremost about children and war. We also wanted to see how the media would respond to such a video.

The video attracted more than 5 million views after it was “discovered” on YouTube.