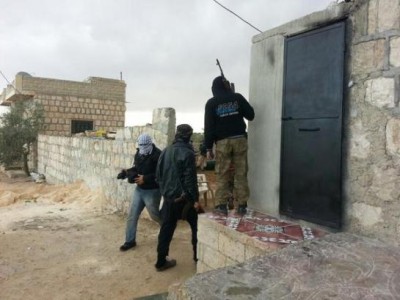 The Idlib News Network describes the discovery of the bodies of civilians in Deir Sinbol, the main SRF base in Idlib Province. It does not attribute the deaths to the SRF, noting that the Islamic State held the base before the SRF took it last year.

Extremely graphic video of the bodies, retrieved by Syrian Civil Defense forces from caves, has been posted.

It also portrays the “fall” of the SRF’s leader Jamal Maarouf, noting the controversy over his command and his tense relations with other groups in the insurgency.

A week after Jabhat al-Nusra’s fighting with other groups in Syria’s insurgency, mainstream media is filled with rumors and exaggerations about the “Al Qa’eda-linked” Islamist faction.

On October 27, the Syrian Revolutionary Front — which has been supported by the US — started clashes in villages in Idlib Province in northwest Syria after some of its fighters defected to other factions.

Jabhat al-Nusra responded with attacks on the SRF, and it also fought with Harakat Hazm, another US-backed brigade, when the latter tried to block its reinforcements. Both the SRF and Harakat Hazm have withdrawn from their main positions.

The Syrian branch of al-Qaeda have advanced near the Syria-Turkey border, in an apparent attempt to seize a vital crossing under control of Western-backed rebels.

The Nusra Front edged to less than 6km from the strategic Bab al-Hawa crossing on Monday, a key supply line to Syrian rebels fighting in the northern Idlib province.

The story has fatal flaws. The crossing is held by the Islamic Front bloc, which — far from being “Western-backed” — has been kept at distance by a US which does not see it as “moderate”.

Jabhat al-Nusra and the Islamic Front have cooperated in numerous battles against the Syrian regime, including last week’s offensive on Idlib city. There is no evidence that Jabhat al-Nusra has turned on the Islamic Front: to the contrary, the two groups have been linked in their criticism of the SRF over alleged corruption and war profiteering.

However, the article has no specific reference to plans against Jabhat al-Nusra. Instead, there is the general assertion, “U.S. concern has grown rapidly in recent days amid fears about the [Bab al-Hawa] border crossing”, followed by a series of disclaimers:

Officials cautioned that no proposal for expanded airstrikes has reached the level of decision-making, and its main advocates may not include the White House.

“There are a lot of possibilities that are always being discussed. I don’t want to make it seem like we’re on the verge of an announcement,” one senior administration official said. “We want to help the opposition, we want to keep the border crossings open, and we’re looking a lot of things,” the official added. But “all of those actions are immensely complicated, for reasons you can imagine.”

Ironically, the Post does not mention that the US has already carried out airstrikes against Jabhat al-Nusra. On the first day of its aerial intervention in Syria last month, Washington fired missiles on two Jabhat al-Nusra bases in Idlib and Aleppo Provinces, killing more than 60 fighters and at least 14 civilians.

Jabhat al-Nusra recognizes the leadership of Al Qa’eda, but — in contrast to the Islamic State, with whom it split in 2013 — claims that it consists mainly of Syrians and is working with Syrian groups for the overthrow of the Assad regime. It has been listed as a “terrorist organization” by the US since late 2012.

The opposition Syrian National Coalition has established its first office in rural Latakia Province in western Syria “to identify the needs of the people and provide them with the necessary services”.

The Coalition said Mohammed Khair al-Wazir, head of its offices inside Syrian cities, had met with officials from the local councils in Lattakia Province and discussed the humanitarian situation and ways to increase coordination.

“The Syrian Coalition will very soon have presence in all Syrian cities to serve the Syrian people and provide them with what they need in their battle against the Assad regime,” the staement declared.

The Coalition has been criticized for not having enough of a presence inside Syria to work with the country’s people in the effort to establish an alternative to the Assad regime.

A Free Syrian Army commander has claimed that a pro-Assad gang, infiltrating the FSA, was responsible for two deadly car bomb attacks on the Turkish-Syrian border.

Abu Muhammad, commander of Abu’z-Zuhur Revolutionaries Front, said a member of the “Ekrem” gang had confessed to the bombings, as well as other serious crimes such as hijackings and rapes.

A car bomb attack at the Cilvegözü border gate in Hatay Province in southern Turkey, across from the Syrian gate of Bab al-Hawa, killed 14 people on February 11, 2013.

On February 2014, a car bomb struck a Syrian refugee camp near the Bab al-Salam crossing.

Abu Muhammad said the FSA knows of similar networks which have infiltrated: “We have a list of 25 gang members’ names and we have distributed this list to the revolutionaries in the region.”

French Foreign Minister Laurent Fabius has repeated his call for Western intervention to support insurgents against the Assad regime, as well as countering the offensive of the Islamic State.

Fabius writes in The Washington Post on Tuesday that an international coalition must not only defend the Kurdish center of Kobane against the Islamic State, but also defend Syria’s largest city Aleppo:

The city is almost entirely encircled, connected to the outside world by a single road to Turkey. The regime is seeking to destroy the resistance through cold and hunger. While 1 million people have left to join the flood of Syrian refugees, some 300,000 Aleppans are holding on, threatened with the same death and destruction that the regime has inflicted on Homs and the suburbs of Damascus.

The dictator [President Assad] prefers to deliver Aleppo to terrorist atrocities, even if that means allowing Daesh to flourish on Aleppo’s eastern edge. Aleppo’s residents will then pay for Daesh’s [the Islamic State’s] setback in Kobane.

Earlier this week, Fabius and Turkish President Recep Tayyip Erdoğan used their meeting in Paris to press other countries, notably the US, to renew the campaign for removal of the Assad regime.

Fabius writes today, “Assad and Daesh are two sides of the same barbaric coin. Assad largely created this monster by deliberately setting free the jihadists who fueled this terrorist movement.”

Video: Jabhat al-Nusra Fighters Inside A Former UN Base in Southwest

Jabhat al-Nusra fighters tour a former base for UN peacekeepers in Quneitra Province in southwest Syria:

Insurgents have taken over most of the province this year. During the fighting, Jabhat al-Nusra took 45 Fijian peacekeepers hostage for two weeks, while Filipino troops were surrounded in their base.

Reports indicate the Syrian military advanced further on Monday in the town, on the main Damascus highway to Daraa and the Jordanian border, controlling the east and north of the town. Insurgents countered that they took a hilltop west of Shaykh Miskin.

Activists claim 26 regime airstrikes have been carried out in recent days.

A girl wounded in the fighting:

The Kurdish militia YPG reports fighting on three fronts with the Islamic State in the besieged Kurdish center of Kobane in northern Syria.

The YPG claims it repelled an Islamic Front attack in the east of Kobane, killing three jihadist commanders.

On the southern front, the militia says it killed 5 Islamic Front fighters in repulsing an assault, while carrying out an operation on the highway to Aleppo in which three more jihadists were slain.

On the western front, the YPG says that it has launched an operation with the Free Syrian Army about which “more details will be made available when operationally possible”.

Journalist Jenan Moussa, reporting across the Turkish border from Kobane, reports little change in the battlefield: