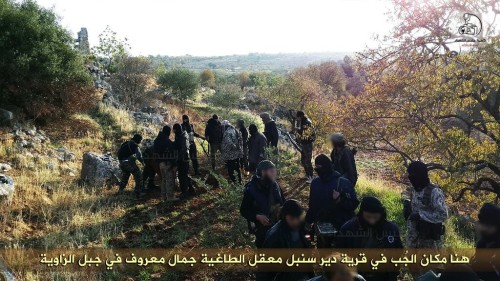 UPDATE 1845 GMT: Reports are circulating that Jabhat al-Nusra has found the bodies of slain civilians in a Syrian Revolutionary Front base which has been taken by the Islamist faction.

The reports do not accuse the SRF of killing the civilians, as the Islamic State held the base at Deir Sinbel in Idlib Province before it was taken by the SRF early this year.

Headlines from Syria continue to be seized by the insurgent in-fighting in Idlib Province in the northwest, with the Islamist faction Jabhat al-Nusra taking the main positions of the Syrian Revolutionary Front and the Harakat Hazm brigade, both of whom have received support from the US.

There were no further reports of Jabhat al-Nusra advances on Sunday, after the faction took the main bases of the SRF and Harakat al-Hazm on Friday and Saturday.

The in-fighting began last Monday, amid claims that the SRF was “sitting on its hands” as other insurgents — led by Jabhat al-Nusra — pursued an offensive against the regime in Idlib city. After SRF fighters defected to other brigades, the SRF leader Jamal Maarouf tried to recover their weapons with raids on houses and reportedly some shelling of villages.

Jabhat al-Nusra, joined by the faction Jund al-Aqsa — which is mainly made up of foreign fighters — hit back hard. In the process, they attacked checkpoints of Harakat Hazm which tried to block their reinforcements.

Jabhat al-Nusra declared a unilateral ceasefire on Saturday, but demanded that the SRF and Maarouf appear in a Sharia court which is dominated by the Islamist faction. There is no sign of Maarouf’s compliance.

Meanwhile, other groups in the insurgency, including the Free Syrian Army and the Islamic Front, have called for a lasting cease-fire and a concentration on the fight against the Assad regime. They have also called for submission of disputes to a Sharia court — meaning an alternative Idlib court, not the one dominated by Jabhat al-Nusra.

Jabhat al-Nusra’s offensive was based in part on long-standing grievances with the SRF, which has been accused of war profiteering, corruption, and theft of supplies and weapons from other groups in the insurgency. This autumn, Jabhat al-Nusra and the Islamic Front announced a drive against “corruption” in northwest Syria which led to some skirmishes with SRF members.

The offensive may also be a response to the US, which attacked Jabhat al-Nusra positions in Idlib and Aleppo Provinces last month, on the first day of its aerial intervention in Syria. More than 60 Jabhat al-Nusra fighters and at least 14 civilians died in the missile strikes.

Leading activists said the US attacks bolstered support for Jabhat al-Nusra among Syrians.

“When American airstrikes targeted al-Nusra, people felt solidarity with them because Nusra are fighting the regime, and the strikes are helping the regime,” said Raed Fares, one of the leaders of the opposition in Kafranbel in Idlib Province.

Fares added that the incident had shaken belief in other elements of the insurgency, including the SRF and Harakat Hazm, “Now people think that whoever in the Free Syrian Army gets support from the USA is an agent of the regime.”

Soon after the SRF’s formation in December 2013, Maarouf was hailed by US media — fed by Washington’s officials — as the commander who would lead a resurgent insurgency. The strategy was in part a response to the formation of the Islamic Front, seen as “Islamist” and thus beyond US support, in November.

At the same time, Harakat Hazm became one of the first brigades to receive US heavy weapons, including anti-tank guided missiles.

In the US, a senior Defense Department official said the Pentagon “is monitoring developments as closely as possible” but could “not independently verify” reports from the ground.

The Islamic State has claimed the capture of a second gas field in a week in central Syria.

The jihadists posted 18 photos on social media showing the Islamic State flag raised in the Jahar gas field and captured vehicles and weaponry.

The jihadists announced, “[We] tightened control over Jahar village and the Mahr gas pumping company, and nearly nine [positions] supported by heavy weaponry such as tanks, armoured vehicles, and heavy machine guns of various calibres.”

Relatives of 27 kidnapped Lebanese soldiers and policemen are meeting today with the head of the Higher Relief Committee, in the hopes of arranging a prisoner swap with their captors.

The Lebanese hostages were abducted in August amid fighting in the border town of Arsal with the Islamic State and Jabhat al-Nusra.

The Islamic State has executed two soldiers, and Jabhat al-Nusra has killed one.

Officials will meet on Wednesday or Thursday to discuss a list of demands issued by Jabhat al-Nusra on Saturday.

The families of the hostages have been holding a tent protest in Beirut over the failure of the Lebanese Government to arrange the release of the troops.