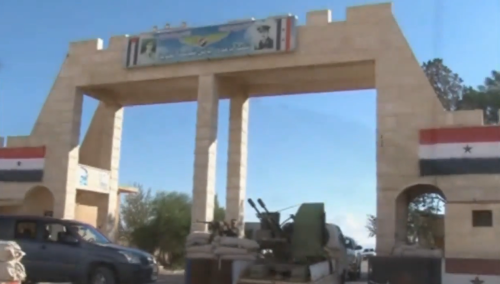 PHOTO: The gate of the T-4 airbase in Homs Province in central Syria

LATEST: Photo — The Clue to a British Fighter with Islamic State

Regime supporters celebrated a victory earlier this week with the recapture of a major gas field in central Syria, but a larger battle continues with the Islamic State.

The jihadists, who control much of north and east Syria, are seeking to expand their hold of territory in Homs Province. They claimed the al-Shaer gas field for the second time last week, only to be pushed out or to withdraw to positions in the area.

Meanwhile, the Islamic State is gathering forces near the T-4 (Tiyas) airfield (see map), west of Palmyra near the road to Homs, which is the primary line of communication between Homs and Deir Ez Zor Province in the east. Seizure of the base would support a number of objectives: 1) cutting off regime support for its forces who are still in the east and fighting the Islamic State in some areas; 2) adding to pressure on local cities such as Palmyra and possibly city; 3) building the capability to move towards the East Ghouta area near Damascus, from where they were evicted by insurgents earlier this year.

The Islamic State reportedly control high ground to the northwest of T-4 and the gas fields. Having retaken al-Sha’er — under the command of the celebrated Colonel Suhail Hassan, “The Tiger” — the regime may send reinforcements in anticipation of a battle for the airbase.

A pro-opposition channel reporting on fighting near T-4 last week:

Pro-regime video of the T-4 airbase:

Photo: The Clue to a British Fighter with Islamic State

A photo from Kurdish militia pointing to the presence of a British fighter with the Islamic State in the battle for Kobane in northern Syria — at the bottom of the image is a National Insurance identity card, and above that are a Lloyd’s Bank card and a provisional driving license: 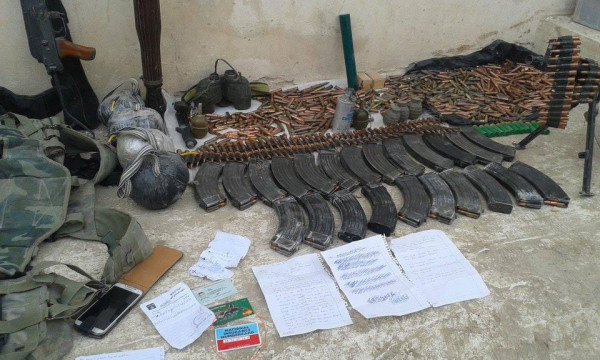 A pro-opposition channel reports on insurgents re-establishing control of the key town of Sheikh Maskin in Daraa Province in southern Syria:

Regime forces had tried to recapture the town, which lies on the main highway from Damascus to Daraa city and the Jordanian border, but were repelled after several days of heavy fighting.

Most of the insurgent units in the battle were reportedly from the Free Syrian Army, some supplied from international centers in Jordan and Turkey.

Insurgents at a former regime checkpoint in Sheikh Maskin: