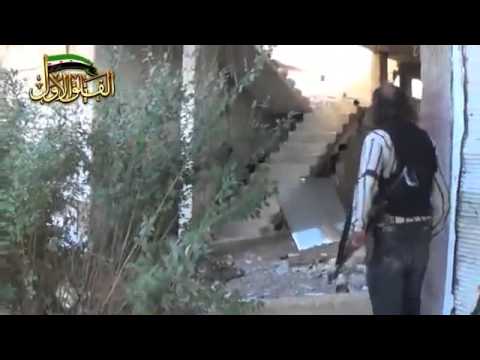 Insurgents are claiming control of Sheikh Maskin, a key town in Daraa Province in southern Syria, after a protracted fight with regime forces.

Sheikh Maskin lies on the main highway from Damascus to Daraa city and the Jordanian border. If insurgents consolidate their occupation, they can move towards the goal of cutting off the capital from southern Syria.

The Assad regime had tried to pre-empt this with an offensive, launched last month, on the town.

Video posted on Wednesday showed insurgents taking the checkpoints and regime buildings at the main roundabout in Sheikh Maskin:

Other footage shows the bodies of Syrian troops:

Only last week, pro-regime outlets were proclaiming that Syrian forces would soon take over all of Sheikh Maskin.

State news agency SANA is silent about the developments this morning.

Citizen journalist Mohammad Ibrahim has told Syria Direct that local people in the Jabal al-Zawiya region of northwest Syria are welcoming the defeat of the Syrian Revolutionary Front and its leader Jamal Maarouf — who have been backed by the US — by the Islamist faction Jabhat al-Nusra.

People have become more at ease after Jamal Maarouf and his men left. People are saying: let him get what he deserves, he needs to be hanged.

Maarouf and his fighters have been accused by other insurgent groups of corruption, theft, and war profiteering.

The leader of Jabhat al-Nusra, Abu Mohammad al-Joulani, said in an audio message on Tuesday: “After repeated attacks on our people and our men in Idlib [Province], Nusra, Ahrar a-Sham, and Jund al-Aqsa and the people of the region made the decision to end the SRF.”

Al-Joulani accused the SRF of being backed — and corrupted — by US and Saudi intelligence services: “[Maarouf] was a man of the revolution before he entered the political labyrinth and attracted Bander bin Sultan [head of Saudi intelligence] and American intelligence.”

Ibrahim says most SRF members defected to Jabhat al-Nusra after the Front’s headquarters was captured. He also said there is “no trace” of the Harakat Hazm faction, which has received US-made heavy weapons, after some of its fighters joined Jabhat al-Nusra.

Harakat Hazm clashed with Jabhat al-Nusra last week when the Islamist faction tried to send reinforcements to its battle with the SRF.

Ibrahim said Jabhat al-Nusra is already establishing its authority in areas taken from the SRF: “The first thing they did was to build a checkpoint, and start to force women to wear the hijab.”