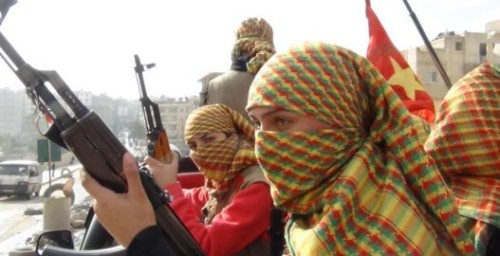 The plight of the Syrian Kurdish center of Kobane, as it faces assault and occupation by the Islamic State, is now receiving headlines. As almost 200,000 civilians in the area fled across the Turkish border, Kurdish officials claimed the US had been slow to respond with airstrikes on the jihadists. Washington has passed the blame to Turkey, saying Ankara should have sent in ground forces.

But Kobane’s crisis is only the public chapter of a story which has been running for more than two years, as the US pondered relations with Syrian Kurds through back-channel talks.

American and Kurdish diplomats have now spoken to Foreign Policy magazine about the negotiations, with US Government documents supporting their revelations.

The US had to be cautious about contacts with the leading Syrian Kurdish party PYD, since it is linked to the Turkish Kurdish Workers Party (PKK) — listed as a terrorist organization by Washington. So, according to former US Ambassador to Syria Robert Ford, the Americans declined the PYD’s formal request for discussions.

However, Ford continued, “We did meet someone who was an intermediary between the U.S. and the PYD. We met him on several occasions: myself once, and other diplomats on other occasions.” He said the discussions were held about every six months and were mediated by a “Syrian citizen in Europe”.

Two Kurdish sources said the talks were later condducted through the US Embassy in Paris. However, they said they were just briefings on teh situation in Syria: “We’re not sure if the contact is going further, to the top of the administration in the US.”

The US ensured that Turkey knew of the contact. According to Ford, Ankara was appreciate but asked the US to “go very slow”, since the Turks had their own back-channel direct link: “They didn’t want the PYD to be able to play us off….They said, ‘If you rush in, it will diminish our leverage with the PYD.'”

And the US pursued a wider political game for an “acceptable” Syrian Kurdish leadership. It tried to boost the Kurdish National Council as a counterweight to the PYD, bringing it under the umbrella of the opposition Syrian National Council. A KNC delegation visited Washington in May 2012, with US officials urging it to “concentrate on bridging the group’s differences with the SNC and focus on the removal of [Assad] as the most urgent goal”.

The KNC finally joined the Coalition in November 2013. However, it continued to express concern about Ankara and other factions: “The extremists in the opposition were getting support from governments, such as Turkey, that wanted to ensure that the Kurds would not have special rights.” They “were distrustful of Turkish support for the Free Syria Army, which they saw as a way for Turkey to keep the Syrian-Kurdish population in check”.

The KNC also continued to complain that their supporters “were not receiving outside support or arms, and could not compete with the PYD”. The US response was to provide political and media training under the Middle East Partnership Initiative. Ford said:

We brought in activists from Syrian Kurdish areas, and it involved things like how to organize grassroots work, how to explain viewpoints to a mass media audience, other sorts of media training. It also involved some issues related to organization building — how to think about structures instead of everything being run by one guy.

And now? Foreign Policy cites Kurdish sources that Washington has turned again to the PYD, pressing it to join the Syrian National Coalition and improving relations with the KNC and Iraqi Kurdish leader Massoud Barzani.

Right now, the PYD is up to its eyeballs in Islamic State alligators. I think we have a common enemy in the Islamic State.