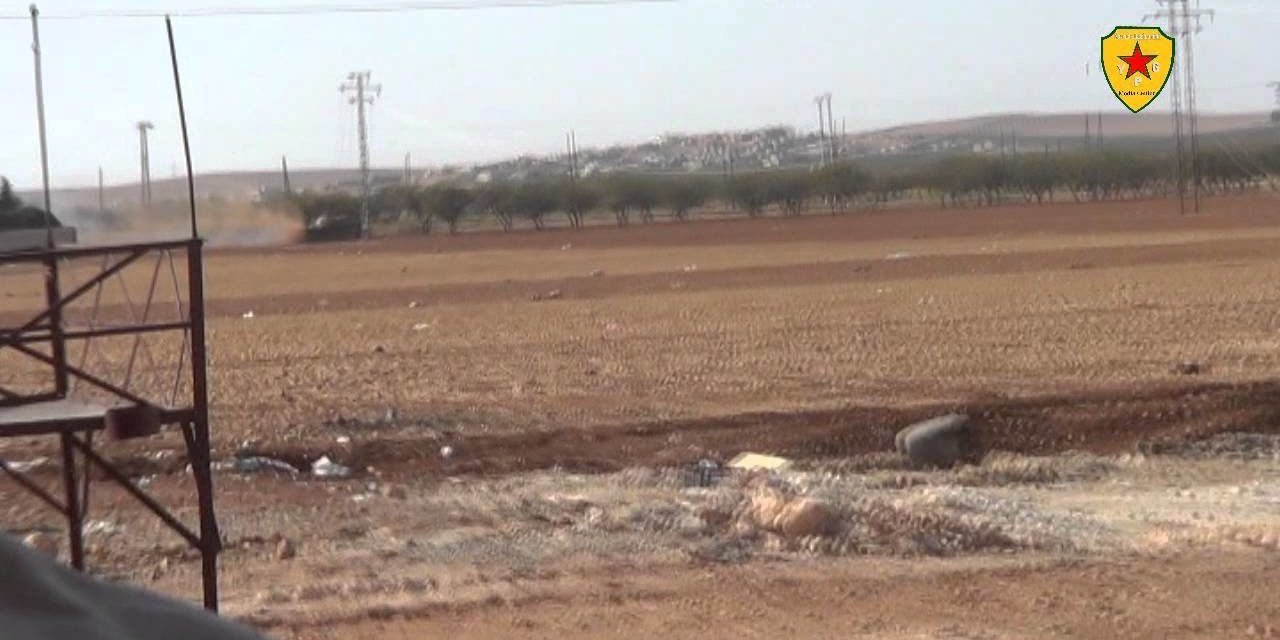 US to Turkey “Sorry We Said You Supported Extremists”
1st-Hand: Blogger Alaa Hallaq — How I Was Detained and Abused in Assad’s Prison

The Islamic State has continued artillery attack on the Kurdish center of Kobane in northern Syria, as its offensive presses for entry into the town.

Ocalan Iso, deputy commander of the Kurdish forces defending Kobani, said jihadists are now within a kilometer of Kobane, as their shelling hit southwestern districts.

The Islamic State used tank and mortar fire in an attempt to seize the strategic Mistanour Hill, overlooking the town from the southeast.

US Central Command said on Saturday that it had bombed artillery positions east of Kobane and vehicles to the south of the town, as well as a logistics site in Hasakeh Province in eastern Syria.

Footage of fighting, including the Islamic State’s armored vehicles:

Meanwhile, Turkish security forces have continued to push Kurdish refugees and journalists away from the border, firing tear gas.

Turkish troops just fired 2 tear has canisters into our vehicle at point blank range, while we were driving away. Everyone ok. 1/2

But the vehicle was briefly on fire. Some damage. Authorities determined to force everyone away from border.

The situation has been further inflamed by stray fire across the border, causing casualties:

At nearby Suruc, fired up Kurdish youths has rocks across the road and stones in their hands. Lots of tension.

A “source close to Hezbollah” has told Reuters that the Syrian insurgent faction Jabhat al-Nusra has attacked Hezbollah posts in eastern Lebanon.

The source said at least 18 people, including 16 insurgents, were killed near the border town of Arsal. Hezbollah fighters moved from other parts of Lebanon to defend the area.

After days of heavy fighting, insurgents have captured the hilltop of Tel Harah, near the town of al-Harah, in Daraa Province in southern Syria.

The attackers include the Free Syrian Army and the Islamist faction Jabhat al-Nusra.

Insurgents have advanced through much of southern Syria this summer, hoping to cut off Damascus from Daraa and Quneitra Provinces.

View from the top of Tel Harah:

Insurgents with the bodies of Syrian troops:

An insurgent with a US TOW anti-tank guided missile:

Government Raises Gasoline Prices Up to 33%

Syrian authorities have raised the price of gasoline by 17% and of diesel by 33%, as they try to contend with fuel shortages amid the loss of oilfields to the Islamic State.

As Kurdish forces try to hold off the Islamic State in northern Syria — and as Turkey has authorized military intervention — the leader of the Syrian Kurdish Democratic Party (PYD) is in Ankara for talks: