Syria 1st-Hand: Blogger Alaa Hallaq — How I Was Detained and Abused in Assad’s Prison 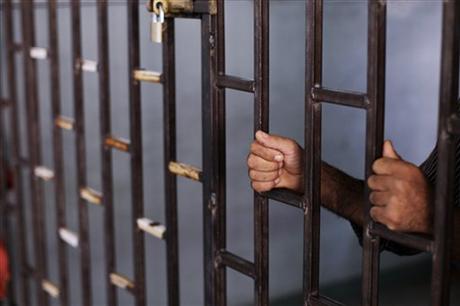 Blogger Alaa Hallaq — “Big Al Brand” on Twitter — writes of how he was detained and abused last year in a Syrian prison:

The Peace Palace in The Hague turned 100 years old in August 28th 2013, and a big celebration was held for this great occasion….Nothing is greater and more satisfying than celebrating peace, and getting invited to that celebration and a week of amazing activities connected to it was a once-in-a-lifetime opportunity for me.

A dear friend whom I’ve never met and a man I look up to, Anas Marrawi, was the one invited. He suggested my name instead of his, and the good people organizing the celebration looked me up and didn’t mind.

They contacted me with details, showed me how hospitable they are and how they’ll take care of every single thing from transportation to hotels, including the visa. I was very excited about this invitation and extremely honored to be one of ten bloggers they chose from around the globe.
I received my invitation on July 25th, and the planned program on the 26th, and they were encouraging us to give suggestions and get involved with the planning of our program a month before the event. Everything was very exciting.

On the 28th, I contacted several of the young men I was invited with, and I had the numbers and emails of the people in charge of the event and helping us out in The Netherlands’ embassy in Egypt and Lebanon. I had to get a date with the embassy in Beirut to deliver my visa application and invitation, since getting the visa takes up to 15 days, and when I looked online the only free date was on the 29th, meaning I had to go to Lebanon that very same night! And it was almost 3 PM.

I booked the spot at the embassy, filled out the visa application, and decided to do whatever I can to not let this opportunity go.

It was Ramadan…and since I was in Homs, I had to go to Damascus first since no transportation from Homs to Lebanon was available due to clashes near the border. Around 3 PM, no buses either, so I called a taxi driver and packed my papers and a couple of things in a small bag. I didn’t have time to shower or shave.

At exactly 4 PM I was on my way to Damascus. I knew my name wasn’t in the wanted lists at security checkpoints since they raided my house not long ago and checked my ID, but what I didn’t have time to do is to check if my name was in the wanted list at the border. I didn’t give it any thought because, why would my name be on such list?

Few hours and tens of security checkpoints later, we arrived in Damascus, and that’s when I decided to go straight to Beirut and not have a meal in Damascus. I thought I’d get a room at a hotel, order room service, and take a shower. Until the border everything was going normally for such times, and I even bought the paper that allows me to leave Syria. I wrote my name on it and everything and gave it along with my ID to the officer who is supposed to stamp it and give it back so I can cross. That guy told me to go inside because there is something he wanted to ask me about, and that’s when they arrested me.

They took my bag, my cellphone, and my wallet. Wouldn’t let me talk to the driver or make a phone call. I was yelled at and was told to sit still and not open my mouth or else.I sat there listening to my cellphone ringing, and I knew it was my mother wanting to check on me if I crossed the border. I begged them to answer the phone themselves and tell her only that I’m alive! But of course I only got yelled at more.

They brought my file, and the paper that said which branch wanted me, and started asking me questions. They said I was born in 1979 while I really was born in 1984. I told them my older brother was born in 1979, and they figured out that my brother is the one they want since he didn’t do his military service, but they said there’s nothing they can do and they must transfer me to the branch where I was wanted.

One of the officers started laughing at me and the others on that bench, saying things like “If you can’t handle the consequences why start a revolution?” Then he kept coming over and slapping the person next to me with all he’s got. He slapped him more than 6 times every time he came over.
I found out the guy next to me was trying to cross the border with his brother’s ID to avoid being taken to the military service. Every few minutes they’d come back to him and slap him with all their strength.I was kept on that bench for an hour or more, my phone ringing, and hearing insults, then they put handcuffs on me and the guy next to me.

That was the first time I was handcuffed, but in the next 7 days I was handcuffed more than 6 times and in at least 3 types of handcuffs. We were taken to a room where we had to take our shoes and belts off, then they took us to the cell. Also the first time I see a jail cell. It was dirty, it had rats running inside of it, and it had 4 other people.

When they put us in that cell, they wanted to take our handcuffs off, but the key didn’t work, so they left them on. Me and the other guy were handcuffed together for a while until they came back and tried several keys until one worked. In that cell there was a plastic chair and I sat on it. I asked if they’re going to feed us and the answer was no.I spent the night sitting down because the mattresses were indescribably dirty.

That was day one without food, sleep, or contacting anyone.

The next morning we were taken out of the cell, given our shoes and belts back, handcuffed, and led to a bus. We were stuffed there in the last two rows of chairs with our handcuffs on, and I probably was the only one who wasn’t beaten on the way in.

The officers then filled the rest of the seats with big bags of cigarettes they bought from the Free Zone market between Syria and Lebanon. Then they did a count for the cartons and how many each of them will take and sell inside Damascus.

They dragged every person to the branch he was wanted in, and I was wanted for a security branch called 251. We arrived there and there was another guy with me being delivered to that same branch, and he’s been to it before so he kept begging the officer to stay with us so they won’t brutally beat us on our way is like they did to him the last time.

Once we arrived the horrible insults started, we were shoved against a wall until they took our papers and then they dragged us in with our heads down and hands still cuffed.

We went down stairs and there they uncuffed us, shoved us against corners of walls, with our hands behind our backs, then they started yelling our names one by one. Whenever a name is yelled that person had to go answer the basic questions and give the person in charge everything he has in his pockets or bag.
My name was called, I went towards him, and he was an old man with a small table. He opened my bag and started listing what’s in it. He took my phone and memory stick I had and put them in a paper bag and wrote my name on it. He asked me if I was sick, and I told him I have asthma and heart issues, hoping that would help me get less beat up in the days ahead, but that didn’t work as I found I was assured of what I already knew, and that is they don’t care.

I was shoved back against the wall, and more insults of course, then I was dragged into another hall where they told me to take off all my clothes, they checked them and checked me, then they yelled at me to get dressed quickly, while walking towards the big cell where I will be staying.

On the way to that cell, more insults, kicks, etc. They opened the door and shoved me inside. That’s when I found out there are no cells. Just a big hall with hundreds of people like me shoved inside. No bars no windows. Just walls and a door with a camera on top of it. There was a sink with a line to get to it, and I found a place on the floor to sit. No chairs, no mattresses, nothing. Just floor and people, lots of people.

The first thing I heard when I came in is a man asking me what time it was when they brought me in, but I had no idea. I spent the rest of that day talking to other prisoners and swapping stories, and watching some of them being called, taken for a while, then coming back after their interrogation during which most of them were tortured….