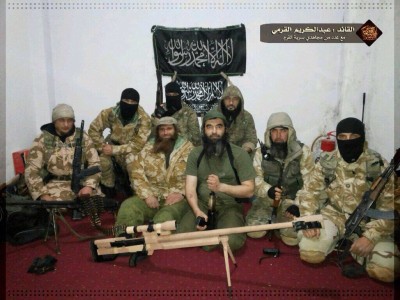 After attacking the positions of insurgent faction Jabhat al-Nusra this week, killing scores of fighters and civilians, the US Government extended its campaign against “extremists” in Syria’s insurgency on Wednesday.

In a statement blacklisting two groups and 10 individuals, the State Department designated the Chechen-led Jaish al-Muhajireen wal-Ansar as a “terrorist organization”.

JMA has been part of the Syrian insurgency since 2013, when Chechen fighters such as Abu Umar al-Shishani moved into Syria. It has been involved in offensives, mainly in Aleppo and Latakia Provinces. This spring, it was prominent in attacks on regime headquarters and positions northwest of Aleppo city.

In its early months in Syria, JMA was linked to the Islamic State through its commander Abu Umar, who was designated an Islamic State Emir for the north of the country. However, those links were broken in the autumn when Abu Umar and some fighters left JMA for the Islamic State.

See Syria Special: Who’s Important Within the Insurgency…and Who Funds Them
Syria Video Feature: The Chechen Jihadists & the Islamic State of Iraq
Syria Special: How Chechen Foreign Fighters Wound Up Fighting Each Other

When the Islamic State began its battle with the Syrian insurgency in January, JMA continued to operate alongside other insurgent faction, although it called for all sides to “make peace with each other, unite, and fight together against the infidels” of the Assad regime.

Bizarrely, the State Department’s designation accuses JMA of cooperating with the Islamic State as well as Jabhat al-Nusra. It also says — without evidence — that JMA “has launched deadly assaults against civilian communities, and kidnapped civilians and other foreigners”.

The State Department also designated the Chechen commander Muslim al-Shishani, the leader of the faction Junud al-Sham, as a “terrorist”.

Joanna Paraszczuk, formerly of EA, also chides the State Department for inaccuracy on her blog, “From Chechnya to Syria“.