Iran Analysis: Rouhani’s Speech to UN on Iraq and Syria — “We Fight Terrorism. West Has Fostered It” 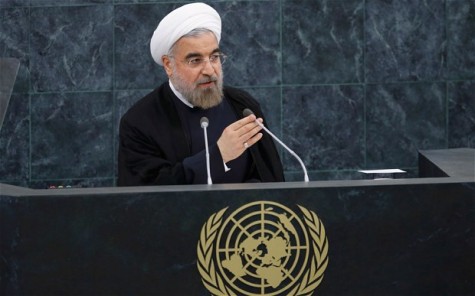 President Rouhani has used his speech at the UN General Assembly to contrast Iran’s leadership in the fight against “terrorism” with the Western powers’ “founding and supporting [of] terror groups”.

All those who have played a role in founding and supporting these terror groups must acknowledge their errors that have led to extremism.1/2

They need to apologise not only to the past but also to the next generation.2/2

Effectively competing with President Obama’s speech on Wednesday for a coaliton “to dismantle the network of death”, Rouhani heralded his initiative at last year’s UN meeting — World Against Violence and Extremism (WAVE) — and said, “Let’s recall Iran had invited everyone to ‘dialogue’ before the criminal act of September 11th.” He called for development, anti-poverty measures, and a fight against “distortion of divine teaching”.

After chiding those Muslims who had perverted their faith for violence, Rouhani turned to the crimes of the West:

The charges propped up the President’s case that the US is “illegitimate” in its purported leadership of the region, which Iran has the position to take up that role:

#Democracy is not an export product that can be commercially imported from the West to the East.

Bluntly put, Iran should be the responsible power to oversee solutions in Iraq and Syria, not the US:

I warn that if we do not muster all our strengths against extremism and violence today, ½

and fail to entrust the job to the people in the region who can deliver, tomorrow the world will be safe for no one. 2/2