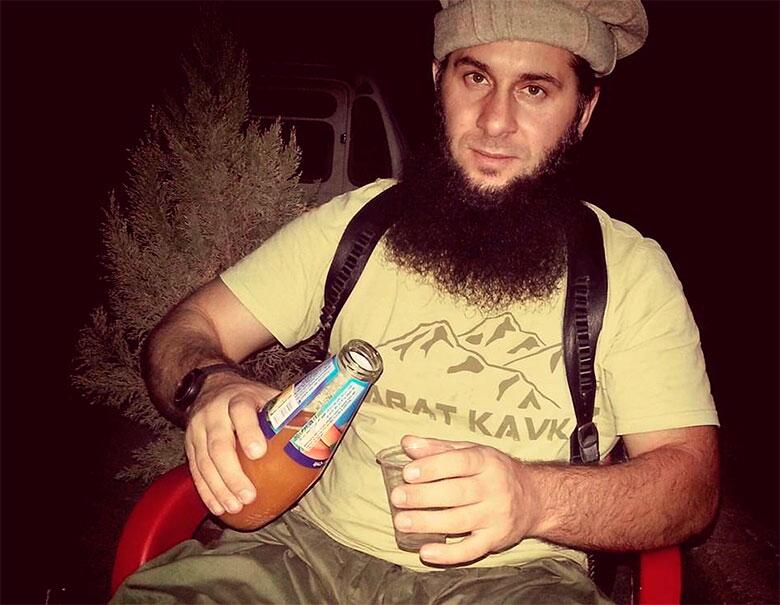 Kavkaz Center, a Russian-language pro-jihad site based in Chechnya, has published a long interview with Salahuddin Shishani, the new Amir of Jaish al-Muhajireen wal Ansar (“Army of Emigrants and Helpers”). The interview was given to the Russian language jihadi site Sham News.

Salahuddin replaced Umar al-Shishani as leader of Jaish al-Muhajireen wal Ansar (JMA) in November, after Umar formally swore allegiance to the leader of the Islamic State of Iraq and ash-Sham, Abu Bakr al-Baghdadi. A faction of JMA, including Salahuddin, refused to pledge an oath to al-Baghdadi because they had already sworn allegiance to Dokku Umarov, the Amir of the North Caucasus-based Imarat Kavkaz (“Caucasus Emirate”), considered a terror group by Russia.

Salahuddin was previously the leader of a faction within JMA.

We have translated the interview below, which helps shed some light onto the attitudes and perspectives of the Chechen leader of a predominantly North Caucasian faction that has remained relatively independent with respect to other jihadist groups in Syria.

Key points to note are:

QUESTION:
For more than 2 years, events in Syria have attracted considerable interest from both Muslims and infidels worldwide. The global media puts them on the front page, as Jihad in Sham (Syria — Ed) causes all Western politicians fear and concern. Recent developments related to internal strife in the ranks of the anti-Assad forces has cheered the infidels and greatly saddened believing Muslims.

Statements by some leaders of military jamaats involved in the conflict are already known, and also by those who eschew fitnah and seek reconciliation of the warring parties. I would like Muslims to know the position of Jaish al-Muhajireen wal Ansar and its relation to this difficult situation. And, of course, many people are asking questions: “How did it start? And who is to blame?”

SALAHUDDIN:
The more you try to figure out “how did it start, who’s to blame?”, the more you get confused. And until all sides go to the same Sharia Court, it’s hard to figure out the truth. But we know that it doesn’t happen in such fitnas that one side is totally in the right, and the other totally in the wrong. And it doesn’t matter how it got started, that’s not important, what is important is that this fitna had been brewing for a long time.

Regarding our position, that’s clear. We won’t fight on either side. Because this bloodshed is very dubious and raises a lot of questions. And I am afraid that a victory or defeat in this war today can turn into a defeat in the Afterlife. We didn’t come to the Blessed Land of Sham to die at the hands of Muslims or to shed Muslim blood.

This conflict caught us at a moment when our main forces had been transferred to Hama, where we had planned an action. In response to these events, we had to revise our plans.

I must note, our brothers from Jabhat al-Nusra received us in a most hospitable and cordial manner. I mean with various representatives of Ahram ash-Sham, Liwa al-Tawhid, Jabhat al-Nusra and others with whom we discussed the developing situation.

QUESTION:
With whom exactly, may I ask?

SALAHUDDIN:
There was Abu Turki, Amir Haleb (Aleppo) from Liwa al-Tawhid, and also Sheikh Tawhik, the military Amir of Liwa al-Tawhid. And several times I met with Sheikh Abu Umeir, the amir of one of the brigades of Ahrar ash-Sham. That is a very well-respected Mujahid, a veteran of the jihad in Afghanistan, who personally knows many of the famous Islamic leaders. There were also representatives from various groups of the Free Syrian Army.

Q:
And did you voice our position regarding the conflict, and our view?

SALAHUDDIN:
Yes. We said that we had come to Sham with a clear aim and goal — to fight with those who are oppressing the Muslims — the Alawites, the Shias, the Assadites, and other infidels. And that we strongly avoid any fitna between the Mujahideen.

Not only avoid, but if it arises, we try to make peace between the warring sides and to support any steps that are taken towards making peace.

Any Mujahid from any side who asks us for asylum will get it, inshallah. And afterward he is free to return to his unit or to any other one that he chooses.

We are ready to help anyone wounded in these hostilities and to give them treatment, inshallah. Today our doctors treated 11 wounded Mujahideen from ISIS. Several were seriously wounded….

Those who got left out in the surrounding area, we will try to bring them back under our protection.

Q:
Unfortunately, it is often the case that however much you don’t want to get involved, the situation draws you into the maelstrom…

SALAHUDDIN:
I don’t know. Every situation is a test from Allah. Several of our brothers recalled the words of Allah in the Quran: And We have made some of you [people] as trial for others – will you have patience? And ever is your Lord, Seeing.

Inshallah, we will not exceed that which we want or which seems to us to be. All important, related decisions we decide up ahead with Islamic scholars, and inshallah, we will continue to do so in the future.

But one thing we do not doubt. We will declare war and fight with anyone who takes even one woman into captivity, whether she comes from the Muhajireen or the Ansars. Whoever tries to kidnap women and children will severely regret it.

And those who try to oppress local Ansars and their families should not doubt that they will feel the full wrath of our Mujahideen. Inshallah, we shall not leave a single evil deed unpunished, whoever is responsible.

Q:
But there were ongoing rumors that three women from the Muhajireen were kidnapped after their men were killed?

SALAHUDDIN:
They were just rumors, and nothing came of them. And I suspect that the rumors were put out intentionally.

There’s another situation where we won’t leave things to chance. If our property is stolen then we will demand it back, and if it is not returned, we will fight with them. And we have a basis for that.

(Salahuddin quotes from the Quran)

Incidentally, like I already said, one of our most important tasks today is the strengthening of the front at strategic important directions near Aleppo, in those areas where our brigade is responsible.

Q:
There is another typical question that journalists ask. What’s your prediction?

SALAHUDDIN:
I don’t have any prediction to give. But today or tomorrow there should be a general majlis (“parliament”) session for all those involved in the conflict. All the leaders of the groups, as far as I know, have given their agreement for this.

Inshallah, we will make du’a and hope that Allah gives us sense and helps us make the right solution and the guide us on the right path.