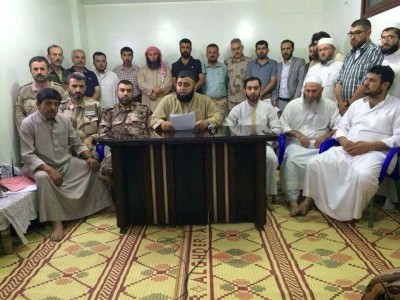 Claims are circulating that 18 of Syria’s insurgent factions have unified to form a “Revolutionary Command Council”.

Signatories of a statement, which was presented by representatives on video, include major groups such as Jaish al-Islam, Jaish al-Mojahideen, Suqour al-Sham, Faylaq al-Sham, and the Syrian Revolutionary Front.

If true, the formation follows last November’s creation of the Islamic Front, which sought to unify and coordinate the leading factions in the insurgency against the Assad regime. The relationship of the Council to the Front is yet to be established, but it is likely to be a further development of cooperation rather than a replacement of the bloc.

As an EA reader notes below, the initiative appears to be an effort to establishment a Supreme Military Council for the insurgency inside Syria, after long-time dissatisfaction with the SMC — under the umbrella of the Syrian National Coalition — operating outside the country.

The development also appears to meet the public demands of actors such as the US for a “moderate” fighting force. The Islamist faction Jabhat al-Nusra is not part of the Council. It is unclear if Ahrar al-Sham and Liwa al-Tawhid, which have been part of the Islamic Front but are not signatories of the statement, are involved.

Saudi Arabia has also been pushing for greater consolidation of insurgent efforts.

Insurgents have had mixed fortunes in recent months. After pushing the Islamic State out of much of northwest Syria, they have been defeated by the jihadists in the east. They have come under pressure in Aleppo by regime advances near Syria’s largest city, but have had significant success elsewhere in the northwest, including Idlib Province; consolidated their hold on territory in the southwest; and pressed Syrian forces near Hama.

Clashes between the Lebanese army and gunmen continued in eastern Lebanon, near the Syrian border, on Sunday morning.

The army said it had regained “complete control” of the Wadi Hamyyed area in Arsal, but assailants continued to fire mortars.

A military source said the army’s death toll has risen to at least 10.

Syrian fighter jets joined the battle, killing and wounding a number of Jabhat al-Nusra members, according to Voice of Lebanon radio.

Jabhat al-Nusra has issued a statement accusing the Lebanese army of “indiscriminate bombing” on Arsal and camps with Syrian refugees. It said it was “ready to get out of Arsal” and went in “only to establish the law of God and support the oppressed”.

“They’re shelling from all directions,” said Qassem Al-Zein, a doctor at the field hospital in Arsal, adding that the hospital had recorded 10 civilians killed so far.

The Islamist group said the detained Jumaa is not one of its members.

The Jabhat al-Nusra denial points to the possibility of the attackers being from the jihadist Islamic State, rather than the Islamist organization.