Gaza Daily, August 3: Netanyahu to His Officials – We Are Not Withdrawing 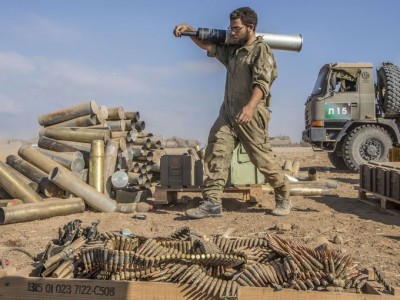 See Gaza Analysis: How Israel and Hamas Rejoined the Path to War

UPDATE 2005 GMT: Gaza’s Health Ministry says eight people were killed and more than 20 wounded in an Israeli Air Force strike on a residential building in the Jabaliya refugee camp in the northern Strip.

Palestinian sources said the victims were all members of the same family.

Israeli forces have repeatedly struck Jabaliya, including last week’s attack on a UN shelter that killed at least 15 people and aroused international condemnation.

The Gazan death toll is now more than 1,800, with more than 130 people killed today.

Meanwhile, the Israel Defense Forces have responded to criticism of their shelling of a UN shelter near Rafah, killing at least 10 people, by saying they were targeting three Islamic Jihad fighters on a motorcycle.

The IDF said it was “not evident” that damage to the former school was caused by its strike.

UPDATE 1905 GMT: Israel’s political strategy — whether or not there are ceasefire talks — will be to split the Palestinian Authority from Hamas, breaking the “unity” agreement they announced in April.

How does West Jerusalem plan to accomplish this? Apparently by calling Authority leader Mahmoud Abbas a supporter of terrorism.

The Israeli Ambassador to the US, Ron Dermer, made the allegation on US television on Sunday morning:

You have to fight terror. You can’t embrace terrorists. That’s unfortunately what President Abbas has done.

Dermer said the Palestinian unity government is “a terrible thing for peace. The road to peace goes over Hamas; it doesn’t include Hamas.”

(Palestinian Authority officials) now unfortunately are in alliance with this terrorist organization, and it’s a genocidal terror organization. Hamas’s charter calls for the murder of Jews worldwide. I hope that after this round of fighting is over, that President Abbas will abandon the pact that he has made with Hamas, and that he’ll go back to peace negotiations.

The Ambassador also declared that “Hamas is like Al Qa’eda”:

UPDATE 1905 GMT: For the second time in three days, the Obama Administration has criticized the Israeli shelling of a UN shelter.

This afternoon State Department spokeswoman Marie Harf said the US was “appalled” by the “disgraceful shelling outside an UNRWA (UN refugee agency) school”, in which 3,000 displaced people were living.

“The coordinates of the school, like all UN facilities in Gaza, have been repeatedly communicated to the Israeli Defense Forces,” Harf said.

The US statement follows the same lines as that of UN Secretary General Ban Ki-Moon and the British Government.

UPDATE 1645 GMT: UN Secretary General Ban Ki-moon said the attack on a shelter near Rafah on Sunday was a “moral outrage and a criminal act”, calling for those responsible for the “gross violation of international humanitarian law” to be held accountable.

The shelling, amid ongoing Israeli bombardment of Rafah, killed at least 10 civilians.

Ban said the “Israel Defense Forces have been repeatedly informed of the location of these sites”.

UPDATE 1640 GMT: The Al-Qassam Brigades, the military branch of Hamas, has said that all Israeli cities are now targets for rocket fire: “The enemy will not enjoy quiet, stability and security until all the Palestinian people’s justified demands.”

The Brigades said that so far they have tried to “avoid damage to civilians as much as possible”, with attacks on Tel Aviv, Be’er Sheva, and Kiryat Malachi…in response to the continued Israeli massacres, the last of which was the attack on the UN school in Rafah”.

UPDATE 1040 GMT: Israel has struck another UN shelter in its continuing bombardment of Rafah in southern Gaza, killing at least 10 people and wounding at least 40.

Witness to fatal attack at Rafah UN school told me target may have been 2 men riding motorbike in front of school, both killed #Gaza 1/2

UPDATE 1030 GMT: A statement on Facebook from Economy Minister Naftali Bennett — curious because it sounds like a call to rally against setbacks — supports Prime Minister Netanyahu in knocking back those officials who spoke on Saturday of withdrawal from Gaza:

Lift your head up. Soldiers, wherever you are: It’s not over. In these moments there is the danger of complacency….

This is the time for unity and support as our soldiers still stand behind enemy lines and are endangering their lives for us… We’ll talk about everything, when there’s time to talk.

We must lift our heads up and carry on. It’s not over.

At least five medical staff have been killed and dozens injured. At least 40% of medical staff are unable to get to work, and at least half of all public health primary care clinics are closed.

UPDATE 0600 GMT: The Israeli military has declared that captured 2nd Lieutenant Hadar Goldin has been killed.

The army had said that Goldin was seized by Gazan fighters in a clash on Friday that killed two other Israeli troops and collapsed a 72-hour ceasefire just as it had begun.

However, it said early Sunday morning that Goldin “was killed in battle in the Gaza Strip on Friday”. An army spokesman refused to confirm or deny that the soldier’s remains had been found.

Just before the announcement, Defense Minister Moshe Ya’alon and Israel’s Chief Rabbi visited the Goldin family home to notify them of the army’s conclusion and offer condolences.

Prime Minister Netanyahu had pledged in a Saturday night press conference that Israeli forces would continue the attempt to find Goldin, “I do not care how much time (is needed)….Israel will continue to make every effort to bring its missing sons home.”

Goldin’s mother pleaded on Saturday for Israel to continue ground operations in Gaza until her son was found.

Saturday, the 26th day of the Gaza War, was taken over by the possibility that Israel would unilaterally withdraw its ground forces rather than join talks for a ceasefire.

However, the day ended in confusion as Prime Minister Benjamin Netanyahu knocked back a series of statements from Israeli officials about withdrawal: “I can’t tell you how it’s going to develop. We are keeping all options for action open.”

High-level sources had told the Israeli media that the Security Cabinet had decided to pull back ground forces rather than join Palestinians — including the Gazan leadership of Hamas — in the negotiations in Egypt. The military supported this with declarations that the Israel’s official justification for the invasion, the destruction of cross-border tunnels in Gaza, was near completion.

Israel’s Coordination for the Occupied Territory said residents could returns to their homes in northern Gaza for the first time since the Israeli invasion on July 17. Reports circulated that some Israeli troops had already pulled back across the border.

However, Netanyahu — facing pressure from the public and some of his own Ministers to show a tangible “victory” after the loss of 64 soldiers in operations and the capture of another — said that once all tunnels were demolished, Israeli forces would deploy “according to Israel’s security needs.”

Asked about his ministers who have demanded that Gaza be recaptured with Hamas dismantled as a political and military organization, he repeated, “All options are on the table.”

Hamas immediately jumped on the Prime Minister’s statement as “an address of frustration and failure”, with spokesman Izzat al-Rizheq saying, “Netanyahu is trying to raise the morale of his collapsing army.” He asserted that the claim of all tunnels destroyed was “funny”.

Meanwhile, as negotiations stalled in Cairo without the Israelis, the bombardment of Gaza continued with targets including a mosque and the Islamic University.

Ten Gazans were reportedly killed in a strike on Rafah on Sunday morning.

Since the breakdown of the ceasefire on Friday and the Israeli bombardment followed the clashes that killed three of its soldiers, an estimated 120 people have been killed in the city. Bodies are now being stored in fruit and vegetable refrigeration units.