Syria Daily, August 28: Now Assad Is in Trouble in the Southwest 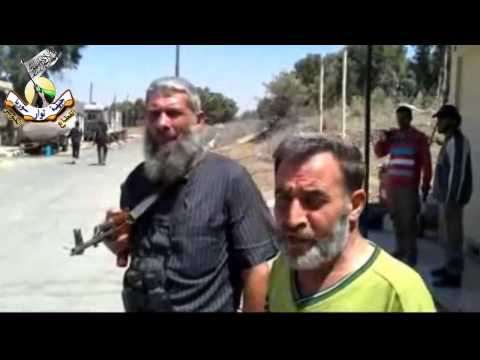 On Wednesday, we headlined, “Assad Regime Faces Defeat on 2 Fronts — In North & In Center“, with Islamic State advances in the north of Syria and insurgent pressure near Hama in the center.

Developments this week have confirmed the growing challenge for the regime in southwestern Syria — both in the Quneitra area near the Golan Heights and the demilitarized zone with Israel, and in the Qalamoun region.

Near Quneitra, insurgents captured the last border crossing with the demilitarized zone, in an attack including the Islamic Front, the Free Syrian Army, and the Islamist faction Jabhat al-Nusra. The Syrian Revolutionary Army is now in charge of the border post.

Insurgents also took the villages of Tal Kroum and Rawadi, and there are reports and video that the opposition may now be in control of at least part of Quneitra town.

The Syrian airforce is now trying to hit back, with bombing of insurgent positions.

Opposition fighters at the Quneitra crossing:

The advance in Quneitra is big enough news for mainstream news outlets to take notice; however, there may be even bigger headlines on the way.

Well-placed sources write that “Assad is in serious trouble” in parts of the Qalamoun region between Damascus and the Lebanese border — supposedly re-claimed and pacified by regime forces in an offensive between November and May.

Rebel units are chasing Syrian forces out of many areas, making fun of their strategy to slice Qalamoun into sectors and then eliminating insurgents sector by sector. In reality, they can’t even make sectors anymore.

Assad’s best allies, Hezbollah, flee —and those Hezbollah fighters who don’t flee avoid clashes. His own troops are doing the same.

Amid the fighting between insurgents and regime forces in southwest Syria near the Golan Heights and the Israeli border, an “armed group” has detained 43 United Nations peacekeepers from Fiji

The office of UN Secretary-General Ban Ki-Moon said another 81 peacekeepers from the Philippines are restricted to their position near Ar Ruwayhinah and Burayqah.

The statement did not specify which armed group abducted the UN forces, who monitor the demilitarized zone between Syria and Israel, although a spokesperson said “we are dealing with non-state armed actors”. He said that the UN could not confirm if the group was the Islamist faction Jabhat al-Nusra, involved in the insurgent offensive which took the last Syrian border crossing with the Golan Heights on Wednesday.

Did Islamic State Executed More Than 200 Soldiers After Victory at Tabqa Airbase?

Claims have been circulating since Wednesday that the Islamic State executed more than 200 Syrian soldiers after it overran the Tabqa Airbase near Raqqa in northern Syria on Syria.

Supporters of the jihadists have been posting photographers which claim to show Islamic State fighters shepherding a long line of Syrian prisoners to their execution.

An Islamic State fighter in Raqqa said a video on YouTube claiming the mass killing of 250 troops was authentic: “Yes, we have executed them all.”

The UN issued a report on Wednesday condemning both the Assad regime and the jihadists of the Islamic State for crimes against humanity.

The 45-page report condemns the regime’s use of barrel bombs, the “systematic torture and deaths of detainees”, and “forced truces” by “siege and bombardment….followed by mass arrests of men of fighting age, many of whom disappear”.

The UN investigators also point to the renewal of chemical warfare by Syrian forces in April, with the dropping of chlorine gas canisters in the barrel bombs on at least eight occasions in Idlib ahd Hama Provinces.

The Islamic State was denounced for public executions, amputations, and lashings. The report found:

Forces of the Islamic State of Iraq and al-Sham have committed torture, murder, acts tantamount to enforced disappearance and forced displacement as part of attacks on the civilian population in Aleppo and Raqqa provinces, amounting to crimes against humanity.

The investigators criticized the lack of action over the war crimes, exacerbating the war and its effects:

The international community’s failure in its most elemental duties – to protect civilians, halt and prevent atrocities and create a path toward accountability – has been matched on the ground by an abandonment of even the pretence of an adherence to norms of international law. As can be seen today, this has grave implications for the entire region.