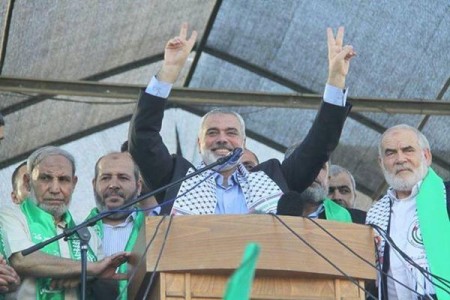 There were sharply contrasting reactions in Gaza and Israel yesterday to the announcement of a long-term ceasefire — while Hamas leaders claimed victory, Ministers in the Israeli Government complained about the failure to defeat the Gazan organization.

Hamas Prime Minister Ismail Haniyeh (pictured) proclaimed in a public address, “Gaza is victorious, and is paving the way to Jerusalem.”

The Prime Minister’s more aggressive line came after a day of criticism, including from some of his Cabinet, that he had erred in agreeing to the ceasefire.

Economy Minister Naftali Bennett, who opposed the negotiations that led to the ceasefire — not only condemned Hamas but also Palestinian Authority head Mahmoud Abbas, whom some in the Netanyahu Government tried to install as the political leadership in Gaza with an agreement:

Abu Mazen [Abbas], the PA president, sits with Hamas in the unity government, funds the salaries of murderers, and bears the responsibility for what we experienced here. With him, too, we will settle the score….

In the world of ISIS (the Islamic State) and Hamas, Hezbollah and the PLO, there is no alternative to force, and no forgiveness for withdrawals and escape from territory, and all those who still support a Palestinian state should say: I saw, I was wrong, I stand corrected.

Bennett and other Ministers complained that they were not consulted about whether to accept the ceasefire, but had the agreement “imposed” on them by the Prime Minister.

Netanyahu insisted last night that the Cabinet authorized him and Defense Minister Moshe Ya’alon to accept ceasefires on their own, without a further vote.

Foreign Minister Avigdor Lieberman tries to regain the offensive with an opinion piece — aimed in part at an audience in the US — in Foreign Policy magazine:

This latest conflict proves once again that Hamas is not a legitimate political actor or interlocutor. The group has attained its power and control only through the barrel of a gun or from behind a rocket’s launching pad. Hamas seeks to achieve its long-stated goals of destroying the State of Israel and the genocide of the Jewish people through violent jihad and by disseminating fear, not just among Israelis, but also among Palestinians, whom it sees as mere tools in its bloody strategy.

Setting lines for further negotiations with Palestine over Gaza’s political and security situation, Lieberman insists that “demilitarization” — disarmament of the territory’s security forces as well as the Gazan military — must be agreed before any other issues, such as the Israeli blockade of Gaza, are considered.

Tuesday’s ceasefire deal did not include accords on the blockade, a seaport and airport for Gaza, and Palestinian detainees in Israeli prisons. Instead, it deferred the issues to later negotiations.