Syria Video Analysis: 5 Myths About Assad & (Not) Helping the Opposition 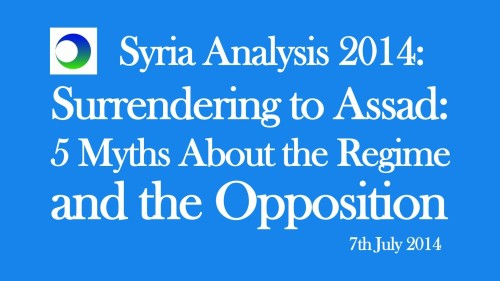 After months of hearing non-stop about “extremists” and “jihadists” and hearing less and less about peaceful protest and “non-extremist” opposition to Syria’s regime, the conflict has been reduced to one where we should walk away — or even ally with President Assad.

This argument is put out not by Assad supporters, but by former US Government officials and by prominent academics and analysts.

So what are their myths — and how can one respond to them?

1. “The Islamic State is Now the Opposition in Syria”
2. “If we assist the opposition, that aid will wind up in the hands of the Islamic State”
3. “We can do nothing because there is nothing that we can do.”
4. “In the end, it doesn’t matter if we step away because the Syrian people will win.”
5. “Maybe we do something, but that something is to ally with Assad.”

All five myths erase the Syrian people. The protesters who have stood up for more than three years? Gone. The fighters who have died? Gone. The insurgent groups who remain and have not been defeated by the Islamic State? Gone. The non-violent coordinating committees who continue to operate? Gone.

You dehumanize the Syrian conflict by reducing it to the inhuman Assad vs. the inhuman Islamic State.