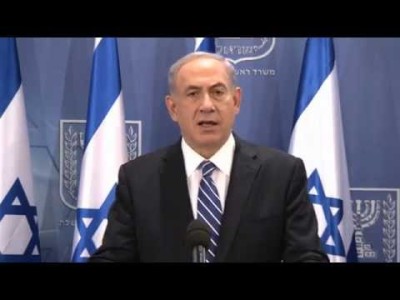 Israel’s Prime Minister Benjamin Netanyahu has promised more airstrikes on Gaza, as the death toll in the territory reached 98 from three days of bombing.

Netanyahu said Operation Protective Edge had “gone as planned”, but “more stages await us” in a statement on Thursday: “We have struck hard at Hamas and the terrorists, and as long as the campaign continues, we will strike them harder.”

Netanyahu insisted Israeli forces are “making every effort to avoid hitting civilians”: “If innocents are hit, it is because Hamas is maliciously hiding behind Palestinian civilians.”

Palestinian officials said on Friday that more than 60 of the dead, and most of the hundreds of wounded, are civilians.

Israel has struck 1,100 targets since it escalated airstrikes on Tuesday. A military spokesman said, “There are still hundreds to finish off.”

Israeli officials say the assault is necessary to halt rocket fire from Gaza into Israel, as far north as Tel Aviv. They claim 550 rockets have been launched since Monday.

No Israelis have died in the attacks. Five have been wounded, one critically.

Tension has been rising after Israeli forces detained hundreds of Hamas members in the West Bank, following the kidnapping of three Israeli teenagers who were subsequently found murdered. Hamas denied any involvement in the abduction.

Netanyahu broke off peace talks with Palestinians in late April, after Hamas and its long-time rival Fatah announced a unity agreement.

President Obama called the Israeli Prime Minister on Thursday to say the “US remains prepared to facilitate a cessation of hostilities, including a return to the ceasefire agreement” after eight days of intensive Israeli attacks on Gaza.

Obama urged Netanyahu to refrain from a ground offensive.

United Nations Secretary-General Ban Ki-moon said at an emergency meeting of the Security Council on Thursday that a ceasefire was “more urgent than ever”. He condemned rocket attacks and urged Israel to show restraint.