Syria Special: The US State Senator Who Thanked Assad 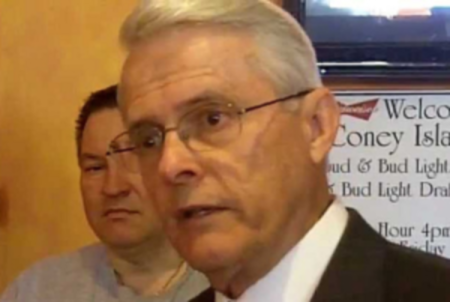 Richard Black, a State Senator from Virginia, had written on April 1 to say Assad was “heroic”. He opened his tribute:

I write to thank the Syrian Arab Army for its heroic rescue of Christians in the Qalamoun Mountain Range….

You have followed the practice of your father by treating with respect all Christians and the small community of Jews in Damascus. You defended their churches and the Jewish synagogue and you have permitted them to worship freely according to their beliefs. I am grateful for that.

Black, a conservative Republican who has served in the Virginia Senate in 2012, explained, “It is obvious that the war in Syria has largely been fought by vicious war criminals linked to al-Qaeda.” He offered his apology for those in the US who opposed Assad, “I cannot explain how Americans, who suffered so grievously at the hands of al-Qaeda, were tricked into supporting the jihadists.”

Praying “that the Syrian armed forces will continue to exhibit extraordinary gallantry in the war against terrorists”, Black concluded, “Please convey my personal thanks to the Syrian Arab Army and the Air Force for protecting all patriotic Syrians, including the religious minorities who face death at the hands of the foreign jihadists.”

The Senator has previously been known for provocative views on social issues. He has opposed emergency contraception, calling it “baby pesticide”. He denied that spousal rape is a crime “when (a couple) are living together, sleeping in the same bed, she’s in a nightie, and so forth”. He has said military rape is a situation “as predictable as human nature”, asking a reporter, “Wouldn’t you love to have a group of 19-year-old girls under your control, day in, day out?”

In an interview with a Turkish newspaper, Black explains why he wrote Assad:

What was your main motivation in writing this letter to Bashar Assad?

There are two purposes in the letter. First was to thank the Syrian Army for its heroic rescue of the Christians in the Qalamoun mountain range. The Christians had been very brutally dealt with the Jihadist who came across the border and they had essentially been under their control for a couple of years and I made a point of thanking Assad for, or thanking the Syrian Army for the skillful rescue of the thirteen nuns who had been kidnapped at Yarmouk. So that was the first thing, to thank him for his treatment of Christians and other religious minorities which include the Alawites all of these different groups there.

The other thing is that I expressed my very deep concern that we are helping Al Qaeda with our actions in Syria. The true principal groups who seemed to leaved all of the fighting over there, Al Nusra, and the other group ISIL which operates out of the Anbar province and has swept into northern Syria. Those were the two things. My concern about assisting Al Qaeda’s affiliates and thanking the Syrian Army for its heroic rescue of the Christians.

Was your letter also a message to Washington?

There has been relatively a little debate about merits of what we’re doing in Syria. With a single exception, when the United States very nearly attacked Syria with guided missile cruisers and the United States attempted to form a coalition of nations to support it. Prime Minister (David) Cameron went before the British Parliament and had them vote to approve war and they overwhelmingly voted against war. And that was a tremendous setback, which I think has hurt PM Cameron to this day. As you know, he had a tremendous setback with the elections just last week.

In this country at the same time when President Obama was unable to get the support of the British, he went to the Congress to seek authorisation for war with Syria. Both the Republicans and the Democrats, the leadership appeared to support the war very strongly, but there were many of us who lobbied against it. And in the end the President did not have the votes to support an attack and he was forced to stand down. That was the point where he accepted the Russian proposal that Syria would give up its stocks of poison gas in exchange for basically resolving the dispute.

Meanwhile the United States has funnelled weapons from Libya into Turkey, and then Turkey funnels them into Syria. So that’s one thing that we did. The other thing that we do is, we train about 250 Jihadists in Syria every month and those Jihadists cross the border into Syria and attack principally in the region around Damascus. I just found out…we’re also training foreign Jihadists in Qatar and — you know — (Qatar) has been tremendous financial supporters for the rebellion, just as Saudi Arabia has.

Is there a dichotomy within the US on foreign policy? Are there two different wings, who are thinking in a different way….

I believe that there is. And I think that there are elements pulling the President in two directions. It’s my impression that the State Department is pulling in towards war and the Department of Defence is urging caution. Because they understand that if we supply rebels with advanced weapons, that the same weapons can just as easily be used to shoot down civilian airliners or to make other terrorist attacks.

Well, I have not heard from the Obama Administration. But I was very interested in Obama’s foreign policy statement at West Point yesterday, and the Republicans and the other War Hawks dismissed it and they said that there was nothing of value.

But I read it and actually I found two very brief things. That I think are very pertinent to Syria….

President Obama said, “direct actions must conform with US values”.

Here is the quote: “That means taking strikes only when we face a continuing, imminent threat, and only where there is near certainty of no civilian casualties.”

Are there also other Senators who think like you? Or are there people in the Obama administration who share your opinion?

I feel certainly there are, but let me read you the second thing that (Obama) said…, “That means taking strikes only when we face a continuing, imminent threat.”

Well Syria obviously is no threat to the United States, never has been a threat so that this does not meet with the first criteria.

And the second criteria is that we must not create more enemies and… this is very important…and not only for the United States but for the coalition of nations that are supporting the war in Syria. Saudi Arabia, Qatar, Turkey, United States and the UK: all of them face a very severe threat.

Once war winds down in Syria, Syrian rebels will be the world’s best trained urban warfare experts. Nothing will compare to them because they have fought for years in the most fierce urban warfare imaginable. They will go back to their home countries whether it’s to Turkey, whether it’s to Saudi Arabia, to Jordan or to the United Kingdom or America, and they will know how to work with explosives, how to make suicide bombs and they will continue to make mayhem in their home countries.

Senator John McCain went to Syria to meet the Jihadists in Syria. He also went to meet the Neo Nazi leaders in Ukraine. Do you agree with his actions? Is this Washington’s main policy?

So what McCain tries to do is not Washington’s main policy….

No, McCain does not reflect the position of the Obama Administration. However he keeps constant pressure on them to do things that are warlike….

Syrian State sources claim that Washington sent an unofficial envoy to Damascus to address themselves to Assad….Is there any truth to this? Has the United States started to negotiate with Assad?

I really don’t know anything about that. I would hope that we have people talking with him. If we do, we need someone who is balanced.

We had Ambassador Ford there. And when the first uprisings began, Ambassador Ford worked with diplomatic protocol, he took the French ambassador and they went and told the rioters that they had America’s complete support, which I think fanned the flames of the revolution. We had no business doing that, you know diplomats are guests of the countries and I think they’re obliged to behave responsibly and I don’t consider that is a responsible way for a diplomat to act.