Iran: Rouhani Hits Back at “Delusional” Hardliners Over “Heaven’s Whip” 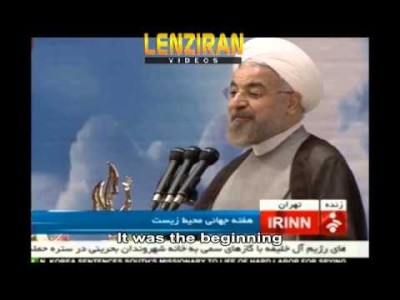 In the latest round in his fight with Iran’s hardliners over political and cultural issues, President Rouhani has said that the State should not interfere with people’s lives in the name of religion.

Rouhani inserted a passage in a Saturday speech on the environment:

They have no work, no profession, they are with delusions. They are incessantly worried about people’s religion and the afterlife. They know neither what religion is nor the afterlife, but they’re always worried.

A week earlier, the President had tried to counter hardliners who have warned him against freeing political prisoners, opening up the Internet, and relaxing regulations such as mandatory hijab (head covering for women): “One cannot take people to heaven through force and a whip.”

The hardliners were quick to respond. Days of attacks culminated in the Tehran Friday Prayer, with Ayatollah Ahmad Khatami chiding:

A respected official has said that people cannot be put on heaven’s path by force….has said that our school is the school of logic and reasoning….

If this means that we should leave people to do whatever they want and leave the people free in all moral, political and economic matters to break all limits set by God, this is not supported by anyone in the Islamic regime.

A member of the Supreme Leader’s inner circle, former Speaker of Parliament Gholam Ali Haddad Adel said hijab must be enforced because the West “want our youth to think about inappropriate sexual relationships”.

Mashhad Friday Prayer Leader Ayatollah Alamalhoda asserted, “Social networks and satellites are tools of the enemy meant to create animosity with Quranic teachings,” and then struck at Rouhani: “The whip is easy, we will stand with all of our might in front of people who want to prevent people from going to heaven.”

See Iran Daily, May 31: Military Says “US Attack To Bring Annihilation of Israel”

Rouhani responded on Saturday by distancing the State from heaven’s whip while giving nominal support to the clergy:

We must not give religion to the administration, religion is in the hands of experts themselves, the clerics, the seminaries, the specialists. It is them who have to propagate religion, the administration must support them, help them, all of this is right.

But he then made his intention clear with a story mocking religious interference in poitics:

There were two great events in Qom during those years. One was the bath becoming a shower, a tragic event in the minds of some.

The other was when (authorities) wanted to change the time, winter and summer hours. They said that this was to “eliminate religion”. They said, “How will we know noon prayers?” Well, how did we know until then? We used to pray at 12:15, now we pray at 1:15, will something happen?