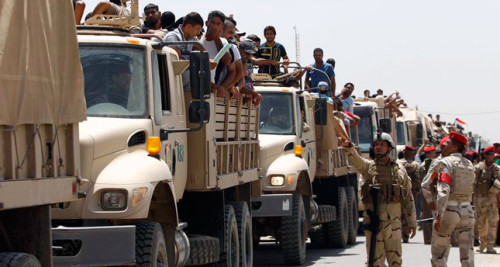 After five days of rapid advance by insurgents, Iraq’s forces — bolstered by Shia militias and Iranian assistance — pushed on Saturday north of Baghdad.

The Government’s troops reclaimed Ishaqi and Dhuluiya, both about 90 km (56 miles) from the capital. They consolidated defenses in Samarra, with its two Shia shrines, about 15 miles farther to the north of Ishaqi and on the main highway to Iraq’s second city Mosul.

A military spokesman, Gen. Qassim Atta, also asserted that Government forces had reclaimed ground in the Salaheddin, Diyala, and Nineveh Provinces in northern Iraq, trying to chip away at the insurgency’s capture of Mosul and Tikrit last Tuesday-Wednesday.

Atta insisted the capital was safe: “The security in Baghdad is 100 percent stable. The majority of Salahuddin Province has been regained. The morale of the security forces is very high.”

Iraqi troops appeared to have made a stand in Samarra, bolstered by the arrival of Shia volunteers and elements of Iran’s elite Qods Force, after they collapsed earlier in the week in the north. Local commanders refused to withdraw when insurgents closed on the city on Thursday, and Prime Minister Nuri Maliki paid a visit to Samarra and its shrines on Friday.

The Secretary of the Supreme National Security Council, Ali Shamkhani, has dismissed Western reports of possible Iran-US cooperation on the Iraq crisis as “completely” and part of Western “psychological warfare”.

Earlier this week, a “senior Iranian official” said Tehran was ready to work with Washington to counter the insurgency in Iraq: “We can work with Americans to end the insurgency in the Middle East. We are very influential in Iraq, Syria, and many other countries.”

Shamkhani said, “We will examine the issue of helping (Iraq) within the framework of international regulations in case of an official request by the Iraqi government and this will be completely a bilateral process and has nothing to do with a third country.”

He then repeated allegations, made by Speaker of Parliament Ali Larijani, of US responsiblity for the Islamic State of Iraq and as-Sham, claiming that Washington and its partner had fostered the jihadist organization: “Certain US allies have financial, intelligence and logistic cooperation with Washington to implement such a policy.”

Iraqi officials said insurgents launched a dawn raid on Tal Afar, in northwestern Iraq near the Syrian border, on Sunday.

“The situation is disastrous in Tal Afar. There is crazy fighting and most families are trapped inside houses, they can’t leave town,” a local official said. “If the fighting continues, a mass killing among civilians could result.”

Residents in Sunni districts accused Shia police and army forces of launching mortars at their areas, prompting ISIS forces near Tal Afar to move into it.

A member of the Government;s Security Committee said Iraqi forces are using helicopter gunships against insurgents on the outskirts of the town.

Tal Afar, inhabited largely by members of the Turkmen community, is 60 km (37 miles) from Iraq’s second city Mosul, which insurgents captured on Tuesday.

A bomb in central Baghdad killed at least nine people and wounded 23 on Sunday.

An Interior Ministry official said the explosion was a roadside bomb, while a police colonel said that blast was followed by a suicide bombing.

Insurgent Leader: Islamic State of Iraq Are “Barbarians” & We Are Stronger Than Them

Muzhir al Qaisi, a spokesman for the General Military Council of the Iraqi Revolutionaries, talks to the BBC about the capture of Mosul.

Al Qaisi explains why his group entered Iraq’s second-largest city alongside the Islamic State of Iraq and as-Sham but says ISIS are “barbarians”. He says local people and imams are refusing the version of Sharia law put forth by ISIS.

The insurgent leader explains the need for his faction and other tribal groups in the fight against the Iraqi Government, saying ISIS have only about 1,000 fighters. He declares that his group is “stronger” than ISIS: “We are organized. We fight with rules and with the Geneva Convention.”

Iraq’s leading Shia cleric, Grand Ayatollah Ali Sistani, has called on all Iraqis to exercise “the highest possible level of self-restraint during this tumultuous period”.

Sistani’s statement on Saturday followed his declaration on Friday, through a representative, that people should support the fight against the insurgency “through official channels“.

The cleric reiterated that Iraqis should “refrain from militant acts that are outside legal frameworks”, and he urged them “to steer clear of sectarian and untamed nationalistic discourse that is to the detriment of Iraq’s national unity”.