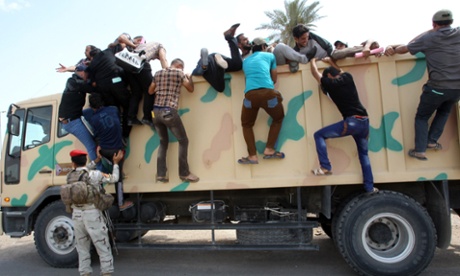 UPDATE 2225 GMT: Police said an airstrike by the Iraqi Army killed at least seven members of the Kurdish security forces near Jalawla in Diyala Province in eastern Iraq.

The Secretary-General of the Kurdish security forces later said that only two people died in shelling rather than an airstrike.

The Kurdish forces moved into Jalawla on Friday after insurgents withdrew under pressure of artillery shelling by the Iraqi military.

UPDATE 1355 GMT: Iraqi security forces have recaptured the town of Ishaqi in Salaheddin Province, about 90 km (56 miles) northwest of Baghdad.

A police colonel said troops and tribal militia found the burned bodies of 12 policemen when they moved into Ishaqi.

Witnesses also said that police and residents pushed insurgents out of the town of Dhuluiyah, about 55 miles north of the Iraqi capital.

After days of rapid advance by insurgents, Friday was marked by all sides to assemble forces north of Iraq’s capital Baghdad.

Shia militias moblized — some revived from the years of US occupation, others made up of volunteers — to fill the vacuum left by collapsing Iraqi security forces, while the al-Maliki Government tried to recover and establish a line of defense.

The insurgents, led by Islamic State of Iraq and as-Sham, moved on several towns as they closed within 30 miles of Baghdad. Kurdish forces, having secured their key areas such as Kirkuk, moved into contested territory such as Jalawla, about 70 miles northeast of the capital.

The leading battlefront is at Samarra, 70 miles north of Baghdad and home to two Shia shrines whose demolition in 2006 fuelled civil war and sectarian conflict.

Insurgents surrounded the town, but rather than attack, they tried to negotiate a withdrawal of Iraqi forces. Local commanders refused, as Shia militias and volunteers travelled from Baghdad in an attempt to reinforce defenses.

Those volunteers were encouraged by a call from Iraq’s leading Shia cleric, Ayatollah Ali Sistani, for all Iraqis — Shia and Sunni — to support the fight against ISIS and its allies. Some Sunni scholars also called for resistance, although at least one prominent cleric backed the insurgency.

In Baghdad, reports pointed to anger, worry, and some panic among the population, as the al-Maliki Government appeared to struggle for a response to the crisis.

Washington’s high-profile intervention was also peripheral. President Obama held a news conference to say military options were being considered; however, he ruled out the use of ground troops and said any operations would take days to prepare and implement.

Indeed, the US appeared to set demands on the Iraqi Government before it would commit to action. Both Obama and Secretary of State John Kerry spoke of a “wake-up call” which required al-Maliki to reform and pursue “unity”.

Gunmen attacked the convoy of the deputy head of Iraq’s Shia religious endowment on Saturday, killing eight of his guards.

Sheikh Sami al-Massudi said his entourage was ambushed near Ishaqi, a town north of Baghdad that was retaken from militants on Saturday (see 1355 GMT update).

The influential Sunni Association of Muslim Scholars has supported the liberation of Baghdad by insurgents “because the ruling regime there is the source of injustice and crime against the people”.

However, the clerics rejected the insurgency’s intention to move on the Shia holy cities of Najaf and Karbala as “irresponsible”, because it would “antagonize the Revolution and eventually abort it”.

The Association also called on the insurgency “to provide security and tranquility” to captured areas in northern Iraq, including the cities of Mosul and Tikrit.

Iraq’s top Shia cleric, Ayatollah Ali Sistani, has reiterated his Friday message for all Iraqis to support the fight against insurgents:

I met Grand Ayatollah Sistani today in Najaf. He reaffirmed call to bear arms but ONLY through legal channels (armed forces)

A parade with artillery taken from Mosul:

The Baathist Naqshbandi Front claims the capture of a position in northern Iraq:

A “senior Iraqi official” has said that Iran has sent 2,000 Basij militia to Iraq.

The official said 1,500 Basij crossed the border into Khanaqin in Diyala Province in east-central Iraq on Friday, while another 500 had entered the Badra Jassan area in Wasat Province overnight.

A local source in Khanaqin said Iranians “were deployed a few days ago”: “The Iranian forces came from Naft Khana border point and are ready to fight.”

The source said about 500 soldiers, with small arms and medium weapons, are based in the Kubra Army Base, formerly used by Iraqi forces.

An Iranian Kurdish official, Muhammad Nazifi Qadiri, claimed, “The Iranian army will help those Iraqi political functions that protect Iranian interest in the country, they are not coming for the sake of Iraqi’s interests.”

He said the forces come from Kermanshah in western Iran.

The militia are in addition to two battalions of the elite Qods Force who reportedly went to Iraq earlier in the week to bolster the defense of areas near Baghdad and to protect the holy cities of Najaf and Karbala.

A well-placed EA source says some of the Iranians have joined the forces of the Islamic Supreme Council of Iraq, led by Ammar al-Hakim.

The latest news comes as Iranian President Rouhani denied in a Saturday press conference (see below) that Iran has despatched any troops to assist the Iraqi Government.

PM Maliki Tries To Bolster Position With Visit to Samarra

Prime Minister Nuri al-Maliki tried to bolster his position on Friday with a visit to Samarra, the key town north of Baghdad that is under pressure from insurgents. 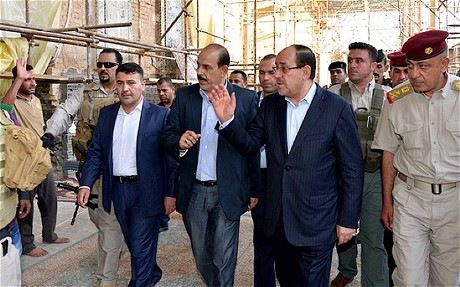 Maliki told army officers, “Samarra will not be the last line of defence, but a gathering point and launchpad” for an offensive against the insurgency.

He declared, “Within the coming hours, all the volunteers will arrive to support the security forces in their war against the gangs of ISIS (Islamic State of Iraq and as-Sham. This is the beginning of the end of them.”

Samarra is the site of two Shia shrines whose destruction in 2006 fuelled the Iraqi civil war.

Turkey: Iraqi Kurds Have Right To Decide Their Future

A spokesman for Turkey’s ruling Justice and Development Party said on Friday that Iraqi Kurds have the right to decide the future of their land.

Huseyin Celik told the Iraqi Kurdish outlet Rudaw, “The Kurds of Iraq can decide for themselves the name and type of the entity they are living in.”

Celik continued that, if Iraq was partitioned, “the Kurds, like any other nation, will have the right to decide their fate”.

He added his belief that Iraq is already headed towards partition thanks to “(Prime Minister Nuri) Maliki’s sectarian policies.”

Ankara has been building links with the Iraqi Kurdistan Regional Government, including a 50-year energy deal for Kurdish oil to be exported via a pipeline to the Turkish port of Ceyhan on the Mediterranean.

The Baghdad Government is resisting the deal, as part of a dispute with Kurdistan over oil revenues.

President Hassan Rouhani has denied reports that Iranian troops are inside Iraq.

“The issue of Iranian forces’ engagement [in Iraq] has not been raised so far,” Rouhani said in a Saturday press conference in Tehran.

Iranian sources have indicated that two battalions of the Qods Force, the elite branch of the Islamic Revolutionary Guards Corps, have been deployed in and near Baghdad. Other sources said about 500 troops were involved, as Qods Force commander Qassem Soleimani reviewed defense lines near the capital and met Iraqi officials.

Rouhani said Iran would only provide consultation and would not engage in military operations: “If Iraq wants any help from us, we will study it. There has been no request from us so far. We are prepared to provide any assistance but within the framework of international law and based on the Iraqi people’s demands.”

The President also dismissed reports — again from Iranian sources — that Tehran was open to cooperation with the US, “The Americans may also want to help, but I haven’t received any word on that so far.”

He warned Iraqi insurgents not to approach the Iran-Iraq frontier: “If any terrorist group wants to get close to our borders and we feel the threat, we will definitely respond with every possible means.”

An Iranian general said on Friday that insurgents within 100 km (62 miles) of the border might be bombed.