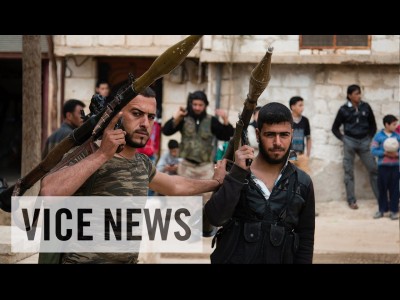 Last month we featured the PR campaign of the Syrian Revolutionary Front, an independent faction trying to play up its role in the insurgency, play down long-running claims that it was pursuing profit and theft rather than victory over President Assad, and win the support of Washington.

The SRF is smaller than other insurgent groups and blocs. It has been prominent in recent offensives in northwest Syria, but it is the publicity campaign that has built this up in some Western media into leadership or even sole responsibility for insurgent success.

The beat goes on this weekend, with both a headline documentary from Vice News and the SRF’s own production, featuring its commander Jamal Maarouf.

Vice News effectively notes the SRF’s success in bringing in journalists after security fears and kidnappings have almost completely eliminated on-the-ground coverage by foreign correspondents: “(We were) the first western video crew to go into northern Syria for 6 months, embedding with the SRF as they re-imposed their rule over the country’s northwestern Idlib province.”

The outcome is a boost for the group — which has been distrusted by others within the insurgency and accused of profiteering — and its prospects. The documentary notes Maarouf is “controversial” but labels the SRF as “the nucleus of a future Syrian national army”.

The footage is eye-catching, as SRF battles the Islamic State of Iraq and as-Sham, and there are some nuggets of information deserving further consideration. For example, an SRF fighter reveals that members — “about 100 of us” — have been supported with health checks in Turkey and training in Qatar in the use of Kalashnikovs, RPGs, and rockets.

Weapons are then provided to the insurgents in Atmeh in northwest Syria, moving across the Turkish border at Bab al-Hawa.

The presentation is not all glowing. There is tension between the SRF and other factions such as Jabhat al-Nusra and Ahrar al-Sham.
The SRF executes one of its men for an undisclosed transgression, and a commander of an allied faction kills one of his men for stealing money.

But that can be turned into a positive. The report explains:

Before the rise of ISIS, brigades within the SRF had won a poor reputation amongst Syrian civilians for looting and banditry.

Now the SRF are replying with a “zero tolerance” approach to criminality within their ranks, to win back hearts and minds.

Contrasting itself with the extremists of ISIS, the local SRF commander declares that his group pursue a “moderate Islam” which does not want to decapitate people or kill them with knives. He emphasizes co-existence with any Christian: “He has his religion and I have mine. And I respect his religion and he has to respect mine.”

The word “propaganda” does pop up, but not to reflect on the SRF’s campaign for journalism’s hearts and minds. Instead, it is the Islamic State of Iraq and as-Sham, whom the SRF is fighting, which has an effective “propaganda campaign”.