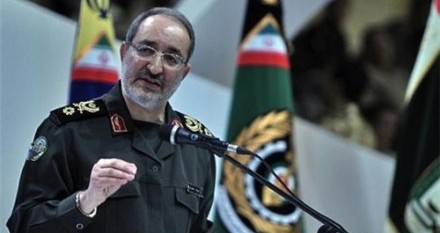 Iran’s military has issued another tough declaration of strength, warning the US that it will make a “crushing response” to “continued enmity”.

The deputy head of armed forces, Massoud Jazayeri, said, “The Americans’ opposition to Iran has not yet ended and their hostility towards the Revolution and the Islamic Republic still continues.”

Jazayeri indirectly challenged the Rouhnani Government’s pursuit of a comprehensive nuclear deal with the US and the other members of the 5+1 Powers:

The Americans don’t stop threats and sanctions even now that they are in negotiations with our nuclear team on the nuclear issue, and threaten us through their over-the-table options, and this shows that those who claim to be world leaders do not have even the lowest level of IQ.

The Iranian military and officials, including the Supreme Leader, have been marked the 34th anniversary of the failed US attempt to rescue 52 American hostages in the occupation of the US Embassy in Tehran. Eight American serviceman died in the Iranian desert when a helicopter crashed into a transport aircraft.

Jazayeri warned the US that in case of its continued animosity, “the Iranian nation will slap Washington in the face and will make the US experience the feeling that it had when its military operations in the central deserts of Iran failed in 1980”.