Syria: Washington’s Favorite Insurgent Maarouf “I Am Not a Thief” 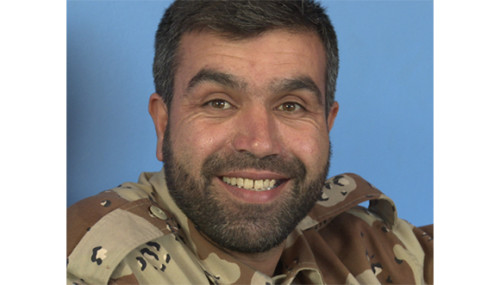 Jamal Maarouf, the insurgent commander who is being touted by prominent US commentators as the “moderate” face of the opposition, has denied that he and his men are thieves and war profiteers.

Maarouf, the head of the Syrian Revolutionary Front, told The Telegraph of London that the charges were from “latecomers to the revolution” who resented his leadership and who are promoting an Islamist ideology:

Last November, The Telegraph accused Maarouf’s group of being among those insurgents “making millions from bribery and extortion“. It repeated claims by other fighters that Maarouf had unnecessarily prolonged battles to profit from funds and supplies provided by foreign backers.

The Telegraph’s Richard Spencer is still sceptical, despite the interview in Turkey with Maarouf.

He cites the commander’s denial of allegations, “He claimed he had never even sat in a BMW – a car to which he is supposed to be partial, according to his accusers.” However, that is one of the few quotes from Maarouf in the article.

Instead, Spencer points out the political motive behind Maarouf’s emergence as a leader who can revive the insurgency:

The sudden Western backing for Mr Maarouf, agreed at the end of last year, was a strategic response to the worsening situation inside the country….

Within weeks, his claims to leadership were being pressed on both journalists and western politicians by an assortment of public relations and lobbying companies with close links to the Foreign Office and the Washington establishment.

And the reporter, repeating the allegations of theft and profiteering, uses faint praise from another commander to cast further doubt:

Last week in southern Turkey, even a senior figure attached to a militia to which the Syrian Revolutionary Front is supposed to be allied, described (Maarouf)…as “one of the biggest brigands in Syria”. He did add, however: “He is one of our brigands, and maybe all rebel leaders have to be brigands.”