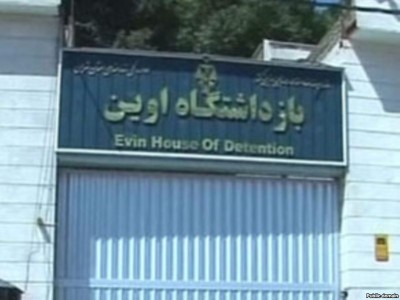 Iran’s regime is showing signs of confusion over last week’s attack on dozens of political detainees in Evin Prison.

The head of judiciary, Sadegh Amoli Larijani, denied reports of the beatings that followed a protest about “aggressive inspections”, and he warned media not to cover the story:

I have issued an order to Tehran and national Chief Prosecutors to stand against any publication of lies and disruptions in national security, so all will know that Iran’s Islamic system is not militaristic for it to excite against the empty excuses of seditionists, saboteurs, and their supporters. If they have shown any tolerance against them, then from now on they will no longer show any tolerance whatsoever.

However, the head of Iran’s prisons, Gholamhosein Esmaeli — who, like Larijani, has claimed that no incident occurred — was fired on Wednesday. He was replaced by the former head of the judiciary’s Special Inspectorate, Asghar Jahangir.

And President Rouhani’s senior advisor, Mohammad-Baqer Nobakht, said on Wednesday, “A team on behalf of the Government has been formed to investigate the recent events at Evin Prison, and after the necessary investigation, a report will be published.”

Opposition websites and families claim that more than 30 political prisoners were injured, four of them seriously, when they were attacked by guards and Intelligence Ministry staff. More than 30 were then put in solitary confinement.

The detainees include prominent journalists, lawyers, and activists who were seized after the disputed 2009 Presidential election.

More than 70 prisoners have written an open letter of complaint, and 28 have appealed to President Rouhani to investigate the matter.

Although some MPs have supported the regime’s claim that the story of the attack is a fiction — spurred by BBC Persian — twelve of the legislators have joined the call for an enquiry.

Fars has published a series of cartoons anticipating Friday’s cut in subsidies on gasoline subsidies and the rise in prices: 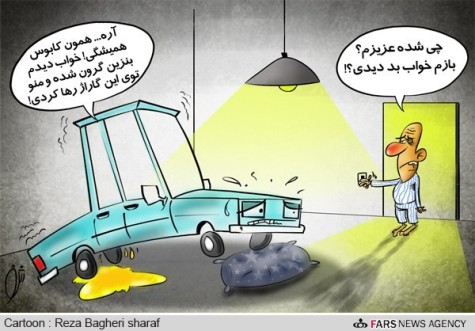 The Rouhani Government is pursuing a second phase of subsidy cuts, claiming that President Ahmadinejad’s first attempt in December 2010 has cost billions of dollars.

Tehran has renewed its warning to Chinese oil company CPNPCI over claimed failures to meet obligations to develop a massive oilfield on the Iraqi border.

The managing director of Iran’s Petroleum Engineering and Development Company, Abdolreza Hossein-Nejad, said CNPCI had failed to provide investment under a $2.5 billion contract signed in 2008 for the Yadavaran oilfield.

Iranian officials have repeated warned the Chinese company that they would cancel its contracts. Earlier in April, they gave CNPCI a three-month ultimatum over another oilfield in South Azadegan, also shared with Iraq.

Wednesday’s announcement may be ill-timed, however; Iranian Economy Minister Ali Tayyebnia is in Beijing this week for meetings on trade, investment, energy, and infrastructure.