Iran Daily, April 9: New Nuclear Talks in Vienna in May 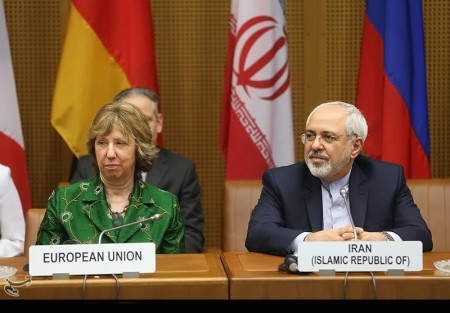 UPDATE 1505 GMT: The European Union’s Catherine Ashton, the lead negotiator for the 5+1 Powers, has said that a fourth round of talks on the comprehensive nuclear agreement will be convened May 13 in Vienna.

Ashton said the two sides need to carry out “a lot of intensive work” to bridge difference and reach an agreement.

Iran’s lead nuclear negotiator said there was a full discussion of all key topics in Tuesday’s third round of talks between Tehran and the 5+1 Powers in Vienna.

Deputy Foreign Minister Abbas Araqchi said, “Discussions were useful, constructive and were made in good atmosphere.”

He expressed the hope that a comprehensive agreement could be reached by July 20, when November’s interim deal expires.

Issues include Iran’s enrichment of uranium, which the 5+1 Powers (US, Britain, France, China, Russia, and Germany) want capped at 5%; the status of facilities such as the Fordoo enrichment plant and the Arak heavy-water reactor; the number of operating centrifuges at the Natanz plant; and the lifting of US-led sanctions.

Araqchi maintained the line that “the enrichment will continue, it will not be suspended or stopped”; however, he added, “its dimensions will be determined during the negotiations”.

The agenda for a comprehensive settlement was agreed in the first two rounds of talks in Vienna in February and March.

International Atomic Energy Agency head Yukiya Amano has said Iran is cooperating with UN nuclear inspectors looking into detonators with the potential to set off an atomic weapon.

Iran and the IAEA have signed a series of agreements since November on inspections and supervision, including of the under-construction Arak heavy-water reactor, the Natanz and Fordoo uranium enrichment plants, and uranium mines.

The Exploding Bridge Wire detonators have non-nuclear uses, but can also be used with atomic devices.

Amano said about the issue, “We are working on it and they are cooperative. Our people in the safeguards department are having close contact with them.”

He also said that Iran is upholding November’s interim nuclear deal with the 5+1 Powers, “I can tell you, these measures are being implemented as planned.”

Four Iranian border guards have returned to their homes, following their release after two months by the Sunni insurgency Jaish ul-Adl.

A photograph of one of the freed men in Mashhad: 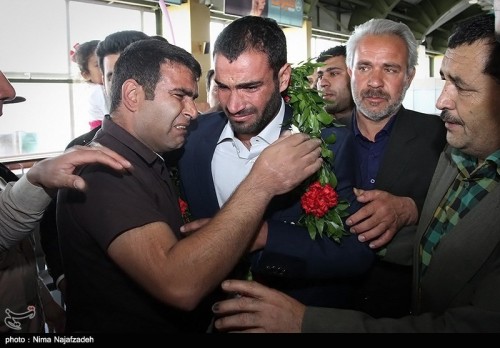 A fifth guard was executed by Jaish ul-Adl in late March. The men were held in Pakistan, where they were taken soon after their abduction in Sistan Baluchestan Province in southeastern Iran.

Central Bank: Inflation Down to 35%

The Central Bank reports that the rate of inflation fell 5.7% between October and March to a level of 34.7%.

The Rouhani Government pledged when it took office in August to bring down the rate of more than 40% by correcting the Ahmadinejad administration’s mismanagement.

President Rouhani said in November that he planned to bring inflation to less than 25% by March 2015. Economy Minister Ali Tayyebnia recently went farther with a projection of less than 15%.

The two sides are reportedly discussing an arrangement, worth $20 billion, for Iran to ship 500,000 barrels per day in return for Russian equipment and goods.

Javadi said, “We are engaged in negotiations with the Russian side on reverse crude swap….The negotiations are continued seriously, but the time for the start of the swap operation have not been finalized yet.”

The White House has said that it has informed Tehran that it will not accept Iran’s new Ambassador to the United Nations.

“We’ve informed the government that that selection is not viable,” White House press secretary Jay Carney told reporters on Tuesday.

Critics say Hamid Aboutalebi was one of the students who occupied the US Embassy in Tehran in November 1979, holding 52 hostages for 444 days.

On Monday, the US Senate approved legislation to bar Aboutalebi from entering the United States.

Aboutalebi and key participants in the 1979 takeover say he only served as a translator on occasions and never had a significant role in the occupation.

The Iranian Foreign Ministry restated on Tuesday that Aboutalebi is qualified for the position.