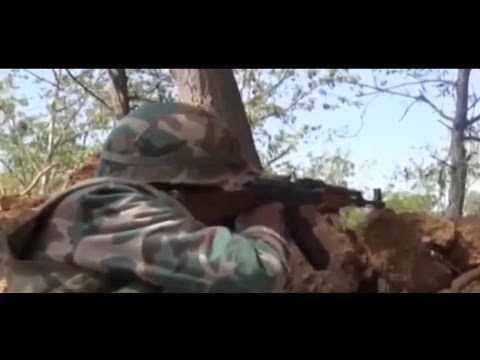 LATEST: Most Surreal Pro-Assad Reporting from a Western Journalist This Year?

The Syrian military continues to pound Mleha, east of Damascus, as part of an offensive hoping to clear insurgents who have held parts of the East Ghouta area for months.

The latest offensive has tried for weeks to dislodge opposition forces, but has so far failed to bring Syrian military control to accompany cease-fires in other areas near the capital, breaking the ring of insurgent-held territory that could lead to attacks on Damascus.

The aftermath of an airstrike on Friday:

A 15-month compilation of fighting from earlier this month:

Most Surreal Pro-Assad Reporting from a Western Journalist This Year?

In a separate entry, we feature a critique by Syrian dissident Yassin al-Haj Saleh of the Syrian commentary of Western journalists Seymour Hersh and Robert Fisk.

However, the most unusual reporting in support of the Syrian regime’s line comes this week from Peter Oborne of The Daily Telegraph of London. Hosted in Damascus, he first made a surreal jump from the British writer Jeffrey Barnard — and acquaintances “Peter and Bonk Walwyn2 — to claims of “ethnic cleansing” and persecution of Christians by insurgents.

Then Oborne filmed a video diary in which he declared Damascus is “very safe….Feels like any city in the world….I haven’t seen any armed men in the street” — that is, except for the Syrian militia who tell Oborne how they are fighting for their country.

The only problems in this Syrian conflict, it appears, are insurgents mortars and destruction of the Christian town Maaloula — thankfully, “reclaimed by the Syrian army”.