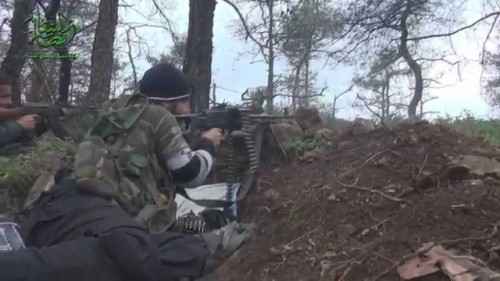 Insurgents reclaimed the Tower 45 hilltop in northern Latakia Province in western Syria on Friday, less than 24 hours after it was occupied by regime forces.

Opposition fighters had taken Tower 45, which overlooks villages near the Turkish border, at the start of their offensive two weeks ago. The Syrian military moved in reinforcements for a series of counter-attacks, and finally put troops on the hilltop on Thursday.

However, yesterday the insurgents — who are using the Latakia offensive for an important psychological victory, after the regime’s Qalamoun offensive took the city of Yabroud last month — were able to document their return to Tower 45.

State news agency SANA is ignoring the insurgent fightback — it is still headlining Thursday’s proclamation by General Ali Abdullah Ayoub, as he toured the area, of “successive victories…(as) a natural outcome of (the Army’s) ideology and unity with the Syrian people”.

Footage of insurgents moving into the town of Babolin in northwest Syria:

The capture of Babolin puts pressure on two regime military bases, blockaded for six months by insurgents before a Syrian fightback, near Maarat al-Nuaman. Opposition fighters are trying to cut the main road link between Damascus and Aleppo.

US officials have said yet again that military aid will be given to “moderate” Syrian insurgents.

Two American “security sources” told Reuters on Friday that the US will train opposition fighters and ship small arms to insurgents from an operating center in Jordan.

President Obama pulled back from a promise last June to send military assistance to insurgents, amid divisions within the Administration and fears of “extremists” fighting the Assad regime.

On repeated occasions since then, unnamed US officials have promised that training of opposition fighters and covert arms deliveries were being arranged.

However, sources close to the insurgency have said that US officials have not only failed to deliver aid, but have blocked supplies from other backers of the insurgency such as Saudi Arabia.

The Assad regime has delivered a shipment of chemical weapons materials for export and destruction for the first time in more than two weeks, amid continued delays in its commitment to hand over all stocks by June 30.

An unspecified but small volume of chemical agents were dispatched, according to the Organization for the Prohibition of Chemical Weapons.

Damascus has missed a series of deadlines for the handover of stocks and equipment after last August’s chemical attacks near Damascus that killed hundreds of civilians.

The Syrian regime has blamed lack of security and logistical difficulties for the delays. Diplomats said Sigrid Kaag, the United Nations official coordinating the operation, also blamed security in a briefing on Thursday.

Clashes were reported in Jobar and Mleha, with both sides claiming victories.

Last week, the regime launched an offensive to move into parts of East Ghouta, where insurgents have held a number of town for up to two years in the conflict.

In Jobar in northeast Damascus, insurgents have reportedly brought in men from other Damascus suburbs where ceasefires have been declared since January.