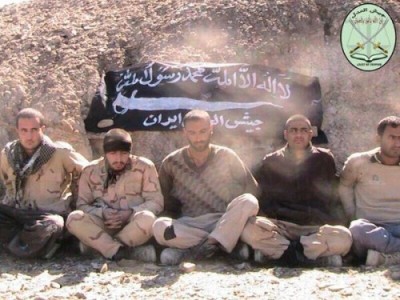 LATEST: Boeing, GE Get Licenses for Aircraft Parts to Iran

The Sunni insurgency Jaish Al-Adl has released four of five Iranian border guards who were kidnapped on February 6 in southeastern Iran and taken into Pakistan.

An “informed Iranian security source” confirmed the release, hours after it was announced by Jaish ul-Adl

The fifth guard was executed two weeks ago.

Jaish ul-Adl then threatened to kill another captive in 10 days. However, earlier this week the insurgents, who have carried out a series of attacks against Iranian forces since last summer, said it had suspended the threat because it was in talks with Iranian authorities.

No details were released on Friday of any deal to free the guards. Jaish ul-Adl had demanded the release of 300 detainees, including 50 women, from Iranian prisons.

The case has dominated Iranian media since the execution, with MPs and officials blaming Pakistan for failure to release the men. The Rouhani Government has also faced criticism for inaction.

As late as Thursday, deputy Foreign Minister Ebrahim Rahimpour denied that any of the guards had been killed.

Boeing, GE Get Licenses for Aircraft Parts to Iran

In a sign of sanctions relief under the interim nuclear deal, Boeing and General Electric have received licenses from the US Treasury Department to export spare parts for commercial aircraft to Iran.

A GE spokesman said the Treasury had approved the company’s application to service 18 engines sold to Iran in the late 1970s. He said GE officials would meet with staff from Iranian airlines in Istanbul next week.

A Boeing spokesman said his company received the license this week and would now contact Iranian officials to determine which parts were needed to ensure continued safe flights of Boeing planes sold to Iran before the 1979 Revolution.

The sales would be the first acknowledged dealings between American aerospace companies and Iran since the 1979 takeover of the US Embassy and subsequent 444-day hostage crisis.

US: Drafting of Comprehensive Nuclear Deal Begins in May

On the eve of renewed nuclear talks between Iran and the 5+1 Powers, the US has said it expects drafting of a comprehensive agreement to begin in May.

A “senior U.S. administration official” told reporters in a Friday conference call that a deal could be struck before the expiry of the interim agreement in July: “All of the parties are committed to finishing within the six-month Joint Plan of Action. I am absolutely convinced that we can.”

A second official said, “We are still clear-eyed about how tough this will be. The real question is if everyone is willing to make the tough choices this will require.”

Iran and the 5+1 Powers (US, Britain, France, Germany, China, and Russia) open their third round of talks on a comprehensive agreement in Vienna on Monday. Experts from the two sides are currently in technical discussions in the Austrian capital.

Iranians have been greeted in their New Year by sharp increases in electricity and water bills, as the Rouhani Government tries to reform the subsidy system.

In December 2010, President Mahmoud Ahmadinejad introduced a complex system of subsidy cuts and support payments to cover the rising prices. The plan was soon beset by bureaucratic tangles, political in-fighting, and accusations of mismanagements — a planned second phase was never approved by Parliament.

Hassan Rouhani promised a review of the program as soon as he took office last August, and his Government has tried to limit the support payments to households on lower incomes.

Top officials say the Ahmadinejad plan was costing the Government more than it received in revenues.

The BBC’s Amir Paivar offers a useful overview of the situation.

Iranian officials have continued to denounce the European Parliament for its resolution criticizing human rights violations in the Islamic Republic.

In the Tehran Friday Prayer, Ayatollah Movahedi Kermani said, “The people of Iran will not allow the European Union to open a new spy den” with an office inside Iran.

The cleric chided, “It is very shameful that they expect strange things from Iran and raise the accusation that human rights are not observed in our country.”

Hassan Firouzabadi, the Chief of Staff of the military, said on Friday, “We recommend wise individuals in the European community move to revise these illegal and anti-human rights positions.”

On Thursday, the European Parliament passed a resolution expressing grave concern over the “continued, systemic violation of fundamental rights” in Iran, and called on the members of the European Union to “mainstream human rights in all of its relations” with the country.

Firouzabadi linked the European resolution, which noted a rise in executions and the holding of political prisoners amid its review of relations with Iran, to “Zionist plots” and the European Union’s support of Ukraine against Russian pressure: “With the mistake…it made in Ukraine, Europe has once again repeated its miscalculation regarding the great Iranian nation and the Islamic Revolution.”

Foreign Ministry spokesman Marzieh Afkham said, “The endorsement of a resolution regarding ties with Iran and human rights situation in the country by the EU parliament is unfounded and unacceptable.”