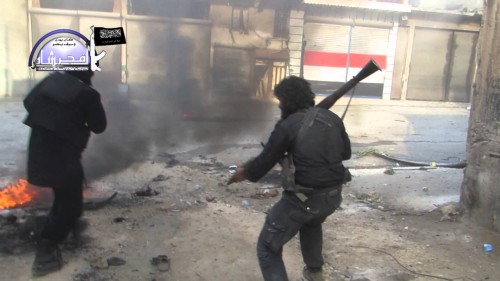 Opposition forces made their biggest gain south of Syria’s largest city, taking a 3-kilometer (1.9-mile) stretch of the vital highway linking the international airport to Aleppo, as well to regime bases to the east.

Control of the link in and near Ramouseh breaks the only remaining supply route to Syrian troops in the western half of Aleppo, which it has controlled during the 21-month stalemate with insurgents.

Insurgents are now attacking a nearby cement plant.

To the northwest of Aleppo, opposition fighters continued to hold the key area between Layramoun and az-Zahraa, threatening an Air Force intelligence headquarters which serves as a command-and-control center.

While the regime forces in western Aleppo have stocks for weeks, if not months, civilians in the area are likely to face increasing difficulties. On Monday, insurgents closed the the Karaj al-Hafez crossing in Bustan al-Qasr, the main link between the two halves of the city. They said pro-Assad snipers were a constant threat and people were suffering “abuses and humiliations” at the hands of Syrian forces.

Electricity was also cut to the city for some time after a regime barrel bomb hit a high-voltage tower.

Over the last two weeks, at least three insurgent factions — including the Syrian Revolutionary Front and Harakat Hazm — have been filmed with the missiles, the first appearance of American heavy weaponry in the conflict.

It is not known if the US supplied the arms or if they came from another source.

However, identifying marks on the missile, made by the Hughes Aircraft Company (now Raytheon), put it in the hands of the US Army in 2004 and the US Marine Corps in 2012.

Needs 3rd party verification, but ID’ing info of missile in previous tweet says US Marine Corps had it in 2012 #Syria pic.twitter.com/guZJpDUX4n

Activists say regime forces have moved into insurgent-held areas of Homs for the first time since last summer.

“They have entered into one area, Wadi al-Sayeh, which lies between Juret al-Shiyah and the Old City,” said Abu Bilal, an activist inside the besieged area.

The ground advance was preceded by intense air attacks(see video below) on neighborhoods such as al-Wa’er.

The Syrian military’s last advance was the capture of al-Khalidiya in summer 2013. In February, it agreed to an evacuation of civilians from the Old City, while maintaining its blockade. Recently, it has called on insurgents to lay down arms.

There are about 1,300 people still in the insurgent-held sections, most of them fighters.

Video: Digging Victims Out of Rubble After Airstike on Al-Sheikh Fares in Aleppo

Civilians are dug out of rubble after a barrel bomb attack this week on the Al-Sheikh Fares neighborhood in Aleppo:

Al Sheikh Fares is home to many displaced Syrians from other parts of Aleppo and the country.

The Chechen-led faction Jaish al-Muhajireen wal Ansar (JMA), as well as pther jamaats (fighting units) led by Chechens and Uzbeks, have put out a 14-minute video on their role in the insurgent advance in az-Zahra’a in northwest Aleppo last week (Waring — Graphic Images after 11:00):

The Syrian military is celebrating further success in its Qalamoun offensive between Damascus and Lebanon, after re-taking Maaloula northeast of the capital and Sarkha near the Lebanese border.

A statement reaffirmed “the Syrian army’s successive victories….in the context of its firm decision to wipe out the takfiri Wahabi project”. It expressed “resolve and determination to carry out its fulfillments to our people and sacrifice the dearest to preserve the homeland’s dignity”.

Over the weekend, Assad forces moved back into the ancient Christian town of Maaloula, into which insurgents had moved in December.

The regime success has also been on the propaganda front: mainstream media such as Al Jazeera have headlined the regime’s proclamations about the Qalamoun gains, ignoring the significant insurgent advances near Aleppo.

Footage of a suicide car bomb exploding in the Akrama section of Homs:

The regime has been trying to take over the remaining insurgent-held areas of Syria’s third-largest city through a combination of offers for the surrender of fighters, a continuing siege on the areas where they are present, and heavy bombardment.

On Monday, the Al-Waer neighborhood, crowded with displaced Syrians from other areas, was bombed.