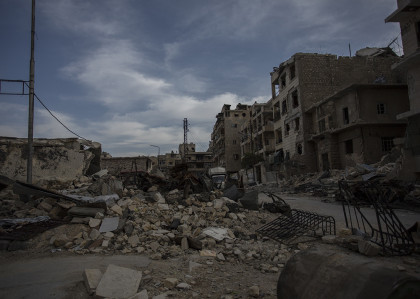 Syria Direct’s Mohammad al-Haj Ali has spoken to Abu Omar, a fighter in the Islamic Front’s Liwa al-Tawhid, about the insurgent offensive in southwestern Aleppo.

Abu Omar speaks of increased cooperation between the Islamic Front, the Islamist faction Jabhat al-Nusra, and Jaish al-Mujahideen, after the February union of the three opposition groups in the Ahl a-Sham Joint Operations Room. He says there is a strengthened relationship “among the different brigades except for the clashes with the (remaining elements of) Islamic State of Iraq a Sham”, who were expelled from the area in January.

Q: What is the extent of coordination between the different brigades in Aleppo? Are they working with Jubhat a-Nusra?

There is no long anything called “brigades”. There are a lot of factions like the Islamic Front which includes Liwa al-Tawhid, Ahrar a-Sham, Suqur a-Sham, Jaish al-Islam, and Jaish al-Mujahideen. Jubhat a-Nusra is obviously a large faction and is very active on the ground. Some of the small brigades are coordinating and have created the Ahl a-Sham Joint Operations Room, which includes the biggest factions. The Islamic Front controls the largest part of Aleppo.

Q: Are there any disagreements between the different brigades in Aleppo? Who is in control of the region?

There were a number of disagreements between ISIS and the Lasus Brigades, but thank God ISIS was removed from the region and most members of the bad brigades were either arrested by the Sharia Commission or fled. Since then the situation has improved dramatically and not only have disagreements dissipated, but there is basically unity among the different brigades except for the clashes with [remaining elements of] ISIS. The front, more than 100 km, is witnessing fierce clashes. On the outskirts of Aleppo, they are also in control of al-Bab, Manbij, Jarablus, Tadif and a number of other small villages.

Q: The regime claims that it is in control of 80% of Aleppo. Is this true? What do the rebels control?

Obviously the regime is lying. It is true that the regime made some advances recently since they use the “scorched earth” policy. But they have also had a lot of losses recently and the FSA has taken the reins and has made advances on a number of fronts such as in Aziza, the Palace of Justice, Sheikh Sa’eed, al-Lirmun and Shwayhana Mountain. The regime controls only 40% of Aleppo.