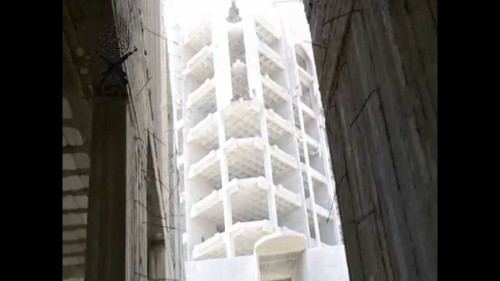 Insurgents have made another notable gain in Layramoun in northwest Aleppo, occupying the Palace of Justice building.

The Chechen-led faction Jaish al-Muhajireen wal Ansar claimed that it moved into the Palace on Saturday night and then repelled a regime counter-attack on Sunday, killing 12 troops — some from Hezbollah — and the head of Air Force Intelligence, Adib Salama.

Both the Palace of Justice and Air Force headquarters are just north of Nile Street:

Insurgents are hoping to squeeze Syrian forces in their western half of Aleppo with moves from the northwest and south. They have hit targets in the center, such as the Aleppo Citadel and the Hanano base, with shells and underground bombs.

The Council adopted Resolution 2139 on February 22; however, because of the Russian threat of a veto, there was no enforcement to ensure aid to besieged areas.

“Far from getting better the situation is getting worse. Violence has intensified over the last month, taking an horrific toll on ordinary civilians,” Amos told reporters after a closed-door briefing. “I’ve told the Council that Resolution 2139 is not working.”

The UN has asked the Assad regime for permission to pass through border crossings to reach an extra 1.4 million people immediately, but there has been no progress, Amos said.

A UN team on the ground in Aleppo for over a week had also tried but failed to negotiate arrangements for aid into the city, she said.

Amos demanded a “step change in delivery”. She suggested no new proposals for how this could be achieved but asserted, “There are a number of areas where with the weight of the Council we could see some immediate movement.”

On Monday, more than 30 prominent international lawyers said the UN could cross the border with aid even without agreement from Damascus; however, this was rejected by a UN spokesman on Tuesday (see below).

25 Schoolchildren Killed in Bombing in Aleppo

Claims are circulating that 25 children were killed by a regime airstrike on the Ein Jalot school in Aleppo on Wednesday.

Video of shrouded bodies (Warning — May Be Disturbing):

On Tuesday, insurgent mortar shells struck a technical school in Damascus, killing at least 14 people and wounding more than 80, according to State media.

The Islamic Front has warned that, if the regime attacks besieged districts in Homs, insurgents will kill more shabiha — pro-Assad militiamen — in the city and across the country.

On Tuesday, the Islamist faction Jabhat al-Nusra struck a checkpoint in Homs with a car bomb.

At least 40 people were killed, according to State media, who said they were civilians including women and children.

Jabhat al-Nusra claims most of the casualties were shabiha and Syrian troops.

Electricity Back in Aleppo After Insurgent Cut-Off

Power has been restored to Aleppo after insurgents cut the supply almost two weeks ago to put pressure on the regime.

Opposition forces claimed on April 18 that they had shut down the grid across Aleppo Province, insisting that the Syrian military stop barrel-bombings that have killed almost 2,000 people since the start of the year.

The Aleppo Media Center said the decision was taken by the Shariah Committee, the Islamic Front, Jabhat al-Nusra, and Jaish al-Mujahdeen, who also called for a lifting of sieges on insurgent-held areas.

The groups threatened to also cut electricity in Damascus and coastal areas.

State news agency SANA said Monday that the grid had been repaired “after several days of power outage due to the systematic attacks carried out by the armed terrorist groups on the high-voltage lines feeding the province”.

Claims are circulating on another regime attack with chlorine gas on al-Tamaneh in Hama Province.

A playlist of videos of treatment of victims has been posted:

Al-Tameneh was also hit last Friday and in mid-April with “poison gas”.

Nearby Kafrzita has also been struck on at least two occasions in the last three weeks. Regime forces have been stalemated in their attempts to take the town of Morek, less than 10 kilometers away, and hindered in attempts to send reinforcements to Aleppo Province.

Islamic State of Iraq Executes 7, Including 2 by Crucifixion

The Islamic State of Iraq and as-Sham announced on Tuesday that it executed seven prisoners in Raqqa in northern Syria.

ISIS said in a statement on social media:

Ten days ago, attackers on a motorbike threw a grenade at an ISIS fighter at the Naim roundabout. A Muslim civilian had his leg blown off and a child was killed.

Our fighters immediately set up a roadblock and succeeded in capturing them. They were then able to detain other members of the cell.

A photograph showed the two crucified men at the roundabout. One of them, blindfolded and with his head spattered with blood, had a banner wrapped round his body proclaiming, “This man fought against Muslims and threw a grenade in this place.”

UN Rejects Calls for Delivery of Aid Without Regime Consent

The United Nations has rejected calls for delivery of humanitarian aid into Syria without the approval of the Assad regime, saying such operations require a stronger UN Security Council resolution.

More than 30 prominent international lawyers wrote to the UN on Monday, saying there was no legal barrier for the movement of aid — even without the consent of Damascus.

It’s the longstanding and consistent position of the United Nations that consistent with its charter … the organization can engage in activities within the territory of a member state only with the consent of that government of that state.

“The only exception is where the Security Council has adopted a binding resolution under Chapter 7 of the (UN) Charter, authorizing the organization to act without the government’s consent.

On February 22, the Security Council unanimously approved a resolution demanding rapid, safe, and unhindered aid access; however, Russian opposition prevented any inclusion of enforcement or punishment if the Syrian military continued to block the assistance.

In his first appearance since declaring his candidacy for re-election on June 3, President Assad has hosted parents of “only-son martyrs” in the Syrian conflict.

Accompanied by his wife Asma, Assad said the Syrian people had shown “states of patriotism…which are impossible to be seen in any other place”.

State news media SANA gives no detail on the new candidates, other than their names, date and location of birth, and gender.

The candidates must each get the signatures of at least 35 of Syria’s 250 MPs to stand on June 3.

The Islamist faction Jabhat al-Nusra has issued a statement saying that it killed scores of Syrian troops and militia in a Tuesday car bomb on a checkpoint in Homs: 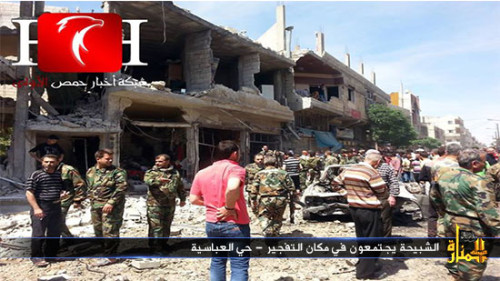 State media said at least 40 people were killed and 116 wounded at the al-Abassiyeh intersection. 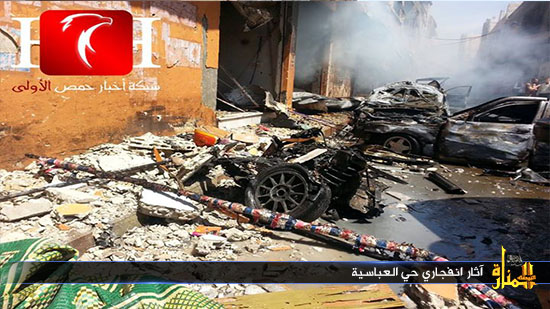 The folks killed by Jabhat al-Nusra’s suicide attack…were shabiha and SAA terrorists in underwear (irregular uniform). Some of them were fighters who didn’t have the time to dress as the blast hit them.

The neighborhood is packed with Assadi extremists who even shelled the UN convoys who tried to bring aid into besieged areas and evacuate starving people. There are totally fanatic shabiha who aren’t in the business of letting a chance to kill civilians pass.

The Organization for the Prohibition of Chemical Weapons said on Tuesday that it will send a team to Syria to investigate claims of a series of chlorine gas attacks by regime forces.

Since late March, witnesses and activists have asserted that chlorine gas canisters, often dropped in barrel bombs, have killed and wounded civilians near Damascus and in Hama and Idlib Provinces. In the most serious attack, in Kafrzita in Hama Province on April 11, at least three people were killed and 200 wounded, according to local journalists.

The OPCW said the Assad regime had agreed to accept the mission and had promised to provide security in areas under its control.

“The mission will carry out its work in the most challenging circumstances,” the OPCW said.