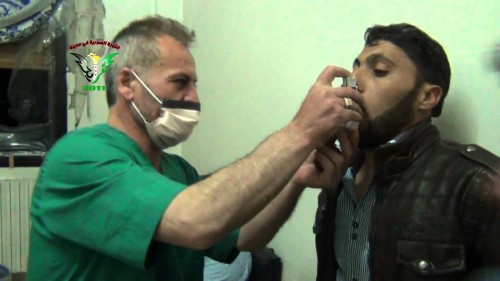 Claims have circulated since Friday afternoon of more regime chemical weapons attacks in Hama Province, in both Kafrzita and al-Tameneh.

Last weekend Syrian forces, who have been stalemated in areas of the province such as Morek, used chlorine gas in several attacks on nearby Kafrzita. A local journalist said at least three people were killed and more than 200 injured.

Yesterday video from Kafrzita again showed civilians who could be suffering from the effects of chlorine, as a doctor claimed more than 50 patients:

Claimed video of the barrel bomb which held the chlorine gas canister:

Al-Tameneh, north of Hama city, was hit for the first time. There are an unknown number of injured.

“>Footage has also been posted of suffering infants.