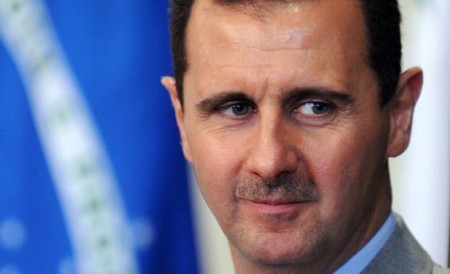 President Assad formally registered on Monday for re-election in the June 3 vote.

Assad, who faces nominal opposition from six declared candidates, said that the happiness of supporters of any Presidential candidate should be manifested first through “national awareness” and then through voting on time.

He then had a request for all Syrian citizens — he asked them not to use gunfire to express their happiness, particularly as “we are living an election atmosphere for the first time in Syria’s modern history”.

The main Syrian opposition blocs have rejected the ballot as a show without political significance, ignoring their demand for a transitional governing authority and Assad’s departure from power.

Even if they chose to stand, most serious challengers would be rejected: a new election law excludes any person who has not lived in Syria continuously for 10 years and obtained the support of at least 35 of the country’s 250 MPs.

A Homs activist tells EA that 40 people slain in a car bomb in the Zahra section of Homs on Tuesday (see below) were not civilians but shabiha — pro-Assad militia — and Syrian Army troops at a regime checkpoint:

The folks killed by Jabhat al-Nusra’s suicide attack…were shabiha and SAA terrorists in underwear (irregular uniform). Some of them were fighters who didn’t have the time to dress as the blast hit them.

The neighborhood is packed with Assadi extremists who even shelled the UN convoys who tried to bring aid into besieged areas and evacuate starving people. There are totally fanatic shabiha who aren’t in the business of letting a chance to kill civilians pass.

These Zahra shabiha are responsible for scores of dead and injured. Some participated in the infamous “Clock Massacre” (an attack in the landmark Clock Square in Homs).

They looted Sunni homes and killed families who survived their bombardment. They act with impunity and don’t even answer to the Assad Governor of Homs.

Insurgents Claim Capture of Palace of Justice in Aleppo

Insurgents are claiming a significant advance in northwest Aleppo, taking the Palace of Justice:

Opposition fighters have been besieging the complex and the nearby Air Force headquarters for weeks. Occupation of the area would cut a major command-and-control line to Syrian forces in western Aleppo.

The Chechen-led faction Jaish al-Muhajireen wal Ansar claims that it moved into the Palace on Saturday night and then repelled a regime counter-attack on Sunday, killing 12 troops — some from Hezbollah — and the head of Air Force Intelligence, Adib Salama:

Footage from Jobar, where insurgents and Syrian forces have been clashing for weeks:

HRW had previously identified at least 340 distinct damage sites in insurgent-held areas between October 31, 2013, and February 20, 2014.

In addition, the Syrian military has fired hundreds of mortar and heavy artillery shells in the 40 days from February to April.

According to the Aleppo City Medical Council, four of their field hospitals admitted 589 people injured in barrel bomb attacks between February 22 and April 17. More than 50 died from their injuries.

Damage sites were concentrated in the neighborhoods of Masaken Hanano, al-Sakhour, Terbet Lala, Helwaniye, Jabal Badro, al-Haidariya, and Owaija. A “substantial majority” were some distance from the frontlines of clashes, with a high density of residential buildings. In most cases, witnesses said there were no military targets nearby.

HRW also noted information about “indiscriminate shelling by non-state armed groups opposed to the government” in areas of Aleppo such as the northwestern front of Layramoun and al-Zahraa.

State Media: 54 Killed in Insurgent Mortars and Car Bombs in Homs and Damascus

SANA said 40 people died and 116 were wounded in a bombing in the busy al-Abassiyeh intersection in Homs.

In the capital, 18 people were killed by mortar fire in the al-Abassiyeen and al-Shaghour neighborhoods. An Institute for Sharia Sciences and a stadium were hit.

The Syrian Observer writes about difficulties in getting suitable housing in Damascus, claiming “even a grave could soon become unaffordable”.

The site, citing residents, says prices have risen sharply because of the influx of displaced Syrians.”

“(Renting a flat) is a huge amount of money and not affordable to many; even businessmen cannot afford it, never mind the displaced people who cannot find a source of income after losing everything before leaving their homes,” says one isplaced man with his wife and a family of three.

A real estate agent adds, “It is almost impossible to find a house to let, as demand is much higher than supply, some letting offices took a chance of the crisis and people’s need for houses to raise the (price).”

To control the influx of displaced people, the regime has started demanding that all tenants register at police stations to ensure that none of them are being sought for arrest.

A security clearance, which takes at least 15 days, is now mandatory to complete the tenancy agreement.

Video: Insurgents Defend Their Control of Karaba in Southern Syria

A PR video for insurgents who have taken control of Karaba in Daraa Province, explaining that they are protecting civilians and respecting Christianity, while rejecting claims that they have stolen from residents:

A Jabhat al-Nusra fighter moves just in time to avoid a tank shell: