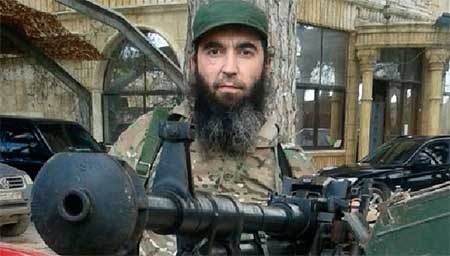 Sham News has published an interview with the deputy Amir of Jaish al-Muhajireen wal-Ansar, Abdul Karim Krymsky, a Crimean Tatar, in which he criticizes the Islamic State of Iraq and as-Sham for their behavior towards people in Aleppo.

Jaish al-Muhajireen wal-Ansar is led by Chechen jihadi Salahuddin Shishani. The faction is not formally allied with any Syrian group, but has sworn allegiance to the Caucasus Emirate.

Amid ISIS’s battles with insurgents across northern Syria, Krymsky hints that ISIS may be deliberately attempting to destroy relations between foreign fighters and residents.

Question: After ISIS left settlements near Aleppo, mass graves were discovered in areas where they had been based. Many corpses showed signs of torture.

According to several reports, 200 people disappeared without trace from Hraytan, Anadan, and Kafr Hamra. These facts had a lot of resonance with Mujahideen and the local population. What can you say on the matter?

Abdul-Karim: Yes, unfortunately, you can’t escape the facts. However someone might want to close his eyes or deny it, the tens and hundreds of corpses, the mass graves, became a kind of calling card for ISIS wherever it went.

Most worryingly, these events came to be part of everyday life, whereby ISIS was not ashamed of its crimes and people were not surprised by them.

Before they left, representatives from ISIS would often say to us, “Are you sure that after we leave no one will lay a finger on you?” We didn’t consider that question to be relevant because Jaish al-Muhajireen wal-Ansar don’t blow up innocent people and don’t execute prisoners, so what have we to be afraid of?

Now it’s clear that the people’s anger might well have spilled over against all foreign fighters. At the start, locals took every foreign fighter for a member of ISIS. Those who had to travel on the roads sensed that. At every checkpoint there were checks, suspicions, alertness.

But we understood that we had to put up with it. Time had to pass. After all their brothers, fathers, sons, had been killed. And who were the killers? The newcomers. Just put yourself in their shoes and you can understand that the Syrian people has a far more tolerant attitude toward people than we do.

Praise the Lord, despite these crimes, the local people don’t confuse all foreign fighters with ISIS and they have a kind attitude toward us If the leaders of ISIS thought they had besmirched the word “foreign fighter” then they didn’t manage it.

Well, in order to sow doubt into people’s souls, unfortunately they make trouble in public, saying, don’t think that all ISIS have left here, there are some left, you know.

And I think that they do this to arouse people’s suspicions against foreign fighters.

ISIS propagandists intimidated a lot of local mujahideen, especially those with families, saying that after we leave the Free Syrian Army will come and shoot the lot of you. That’s because they wrongly associate any brigades that don’t agree with them with the FSA. Many mujahideen have bought into this, unfortunately.

But what is their aim? It could not be that they killed civilians just for the hell of it? Could their leaders, who give the nod to mass summary executions, really not know what the reaction of the locals would be? Why do they throw the corpses of people on the road? Just to scare people?

A-K: Yes, it’s not an easy question. When they resorted to demonstrations of brutality against the population, it doesn’t smell like Islam at all. And such a policy for those who supposedly want to build an Islamic State, it looks really strange.

You can, of course, intimidate civilians. They lived for years under fear and oppression. But when these same several thousand armed men try to intimate tens of thousands of armed men, it looks very illogical not to say stupid.

Any unbiased view sees an enormous gulf between the words “Islamic State” and the violent crimes that they did. Again, it is impossible to discern any common sense, not to mention sincerity, in these acts.

But if we ignore the pompous chatter and judge by their real actions, then there is the suspicion that the purpose of the leadership of ISIS is to isolate the foreign fighters, to deprive them of popular support and stop the flow of Emigrants into Syria. In this case, everything is logical, everything falls into place.

And when you consider the fact that ISIS does not hold any meter of front line against the Assad regime, and all their activity is directed toward the battle against the Muslims, then the question becomes even more interesting.

This, as we know, one of the main aims of the Kharijites. A hadith says that they (the Kharijites) “will leave off worshiping idols and kill the faithful.” That is what we actually observe. They call anyone they like takfiris and without hesitation allow themselves to spill the blood of Muslims, showing in this tenacity and brutality.

Q: But ISIS propagandists categorically deny that they declare takfir on the population and all brigades who oppose them. Although their actions show otherwise.

A-K: To give just one example. Their real attitude can be known from the negotiations and correspondences between the youth of ISIS and our Mujahideen. They ask, “Is it true that you are united with the infidels, to fight against the infidels?”. By “infidels” they mean Nuraddin az-Zinki (Brigade), with whom we have held joint operations.

Q: Maybe young foreign fighters have fallen into ISIS unaware of the extrajudicial executions and other crimes?

A-K: If only it were so. Unfortunately, the facts show that they not only know, but also approve of those crimes, but that they also participate in some themselves. When asked why they do not hold front lines against Assad, they reply that they had, say, another job — that at night they are “working against the hypocrites.”

And how many times have we been personally convinced that this “work” was basically looting the local population. There were cases when our Mujahedeen caught them in the act and handed them over to their Emir so they criminals could be judged by Sharia. But no measures were taken against them. The next day they were seen driving around in cars as if nothing happened.

There was a local Ansar here. He repaired weapons and kept a small shop selling firearms. Many of our weapons were handed over to him for repair or sale. Before leaving, ISIS killed him and completely took away all that was in store. And this is not an isolated case.

About these cases the main propagandists of ISIS usually say: “Everyone makes mistakes”. There’s explanation and “high” ideals for you.

Q: After the assassination of the ally of Osama bin Laden , Sheikh Abu Umeyra for which many people blamed ISIS, its representatives said that Sheikh Abu Umeyr (al-Suri) was killed by his entourage because he was preparing to go over to ISIS.

A-K: Whoever has talked with the Sheikh knows that it is a dirty lie. And this lie is more characterized by arrogance and shamelessness. Generally, it is striking how many lies ISIS can tell. Of those who identify themselves as Muslims, only Shiites and Rafidites lie like that. For them it is an integral part of their faith.

Only a sick imagination could slander Sheikh Abu Umeyra. On the contrary, he repeatedly met with the Amirs of ISIS, gave them good instructions, asked them to stop the bloodshed and infighting. But every time he ran into lies and treachery on their part. What he told us he personally said many times, including in public.

Q: All will be as determined by the Almighty Allah. And no tricks, cunning or treachery by any party will be able to damage the true believers and those standing on the correct path.

A-K: The current situation is very sad for us. We are particularly concerned about the fate of the Mujahideen who genuinely went for Jihad, but were deceived by slogans and flags and fell into turmoil and became accomplices by removing weapons from the infidels and turning them against the Muslims.

Let us pray to Allah that He saves us from every kind of delusion, and won’t let us leave the right way. May Allah save us from shedding innocent blood, the blood of Muslims.