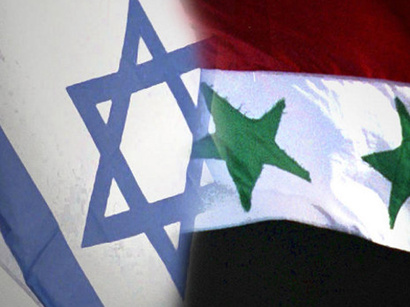 UPDATE 1900 GMT: The Syrian military’s General Command has denounced “the Zionist enemy” for its strikes on regime targets, claiming this is a “new violation of the agreement on disengagement” in the Heights.

Curiously, the statement linked “the Israeli aggression” to the liberation of the prison in Daraa city in southern Syria, and it claimed the Israelis were also trying “to divert attention from the successive victories achieved by the Syrian Arab Army”, such as the capture of Yabroud over the weekend.

The Command warned the Israelis that their “desperate attempts at escalation and creating tension” will “make it vulnerable to all options”.

An Israel Defense Forces spokesman said the targets included military headquarters, artillery batteries, and a training base that “enabled and aided in the carrying out of terror attacks” in the area, taken by Israel in a 1967 war.

The Syrian army said one of its soldiers was killed and seven wounded, in the attack on three posts near the town of Quneitra.

The army statement warned Israel against escalating the situation by repeating “hostile acts” which “endanger the security and stability of the region”.

One of the Israeli soldiers is in serious condition after the explosive detonated on Tuesday as the troops were leaving their jeep, close to the border fence in Majdal Shams.

Israel has carried out a series of airstrikes on Syrian military facilities and convoys since last year, trying to destroy rockets, missiles, and other weapons that could be given to the Lebanese organization Hezbollah.

Limited aid was allowed into the besieged Damascus section of Yarmouk on Tuesday after a two-week halt, according to the UN’s refugee agency (UNRWA).

The area has been cut off by Syrian forces since July 2013. Aid has intermittently been delivered, following the deaths of more than 120 people from lack of food.

45% of Regime Chemical Weapons Moved Out of Syria

The Organization for the Prohibition of Chemical Weapons said on Wednesday that more than 45% of Syria’s chemical weapons stocks have been moved out of the country.

The OPCW said 10 shipments have now been loaded at the port of Latakia for destruction at sea.

The Assad regime has missed a series of deadlines for transfer of the chemical weapons, including a January 30 target of handover of more than 90%.

All stocks are supposed to be destroyed by June 30 under an agreement reached after last August’s chemical weapons attacks near Damascus.

A mixed day on the battlefield: Syrian forces took positions west of Homs and near the newly-captured city of Yabroud, while insurgents advanced in southern Syria on the Quneitra front.

Syrian troops claimed the village of al-Hosn, west of Homs, putting more pressure on the Crusader-era castle Krak des Chevaliers. Northeast of Damascus, they advanced from Yabroud into the town of Ras al-Ein.

Insurgents forced Assad forces to retreat in the south as they challenged silo barriers. The gains in the south, along with the capture of the main prison in Daraa city, are likely to put pressure on regime checkpoints from Daraa to Quneitra.

Opposition fighters also made further gains near Adra, 12 miles north of Damascus, after attacking regime positions in sugar mills over the weekend.

And insurgents gained ground in Aleppo Province, including in Balleramoun on the northern edge of Aleppo city.

On her new blog, From Chechnya to Syria, Joanna Paraszczuk describes and translates a post by a Chechen jihadist about his first battle against regime forces.

The fighter, using the pseudonym Muslim Abdullaev, is part of the jamaat of Sayfullakh Shishani, the Chechen commander who died during an attack on Aleppo Central Prison in February.

The battle took place in Aleppo Province, probably where the Chechen faction Jaish al-Muhajireen wal Ansar has been fighting.

An extract from the translation:

The infidels had heavy weapons and RPG and we had Allah and our faith. Before supper, 3 brothers from our jamaat had become martyrs and 3-4 were wounded. I pray to Allah to strengthen my steps and I didn’t have a gram of fear, with brother Idris Shishani on the roof we took position and fired at them specifically — you could see the infidels but it wasn’t possible to take them because they fired at us with heavy, high caliber weapons.

Brother Idris got hit by a splinter and he got mad and started to fire and I tell him, get down and he got real mad at the infidels and started firing and we barely calmed him down — he yells at me, like in a good way, WE AIN’T AFRAID OF NO INFIDELS WE CAME HERE FOR THE INFIDELS INSHALLAH WE’LL WASTE THE INFIDELS ACCEPT MARTYRDOM — such words were uttered. On the roof where I saw behind me a RPG fell but Allah saved me and I didn’t become a martyr….

When we returned there was a place from where the infidels fired – Muhammad Shishani in those minutes joked with me and smiled and when he ran across a bullet 5.45 hit him and he was martyred. (I remember his smile, it was hard to me, I’ve loved him for Allah….And after I found out that Abu Mehzhin and Abu Hassan, (my close brothers, were martyred. Abu Hamza who with him was wounded in the leg and crawled to us from the infidels’ place for 6-7 hours….

I find it hard, my first operation, and I saw so many martyrs….

Now I am at the headquarters. We are waiting for news and instructions. Allah will soon give us victory and we will take this city. Pray for us. May Allah strengthen our steps.

In a video message, the new leader of the Caucasus Emirate, Ali Abu-Muhammad (Aliaskhab Kebekov) has said jihad in the North Caucasus takes priority over jihad in Syria, except where North Caucasian jihadis cannot make it back home:

Ali Abu Muhammad was elected the new head of the Caucasus Emirate provincial emirs on Wednesday, soon after the announcement of the death of long-time leader Dokku Umarov.

Food prices have risen so high they now exceed the average Syrian’s ability to cover the daily bread. In Damascus, where prices have fared relatively better than in the rest of the country, residents say the average rate of food inflation has reached 300 percent. Transportation and shipping costs, as well as the drop in value of the Syrian pound, have made the situation worse.

In the same period, many government employees, who have the most stable jobs in the country’s war economy, say they have seen their salaries rise by no more than 30 percent. In the private sector, incomes have generally decreased, while tens of thousands of workers have been laid off and remain unemployed.

A study by the Central Bureau of Statistics that looked at how much money the average Syrian family currently needs to buy basic food products shows that each person requires 4,700 pounds, or $32, with a family of four needing about 19,000 pounds per month. That’s the equivalent of a the full salary of an entry-level civil servant. Securing basic goods has forced Syrian civilians to reduce their spending to the bare minimum. According to the estimates of some merchants in major Syrian cities, the domestic goods market has decreased by 70 percent….

Meat, poultry and dairy products have the highest inflation of all consumer goods. The price of poultry has risen from 105 Syrian pounds ($.70) per kilo before the crisis to 615 pounds after.

A crate of eggs rose from 120 pounds to 675, and milk and cheese have experienced similar increases of about 500 percent. The increase in milk prices has contributed to the prevalence of “fake” dairy products made from powdered milk.Consumers of lamb meat are also paying higher prices, averaging 700 to 1,100 extra pounds per portion. Nearly every other staple product on the market has been affected, including rice, potatoes, olive oil, ghee and vegetables.